The Quadrangle of the Birds in Uxmal

Dating between the 8th and 11th centuries A.D., archaeologists have identified the Quadrangle of the Birds as the seat of one of the last rulers of Uxmal, but when viewed through the eyes of a symbolist it becomes easy to see how this complex was much more than a royal residence. It was a sacred place for receiving divine messages.

The Quadrangle of the Birds is a complex comprised of four distinct palace-like structures that collectively form a courtyard nested between the Pyramid of the Magician and the Nunnery Quadrangle in Uxmal and each of its buildings have various chambers accessible from the patio.

At the center of the patio is an altar square base platform with a cylindrical limestone column In the middle which most likely represents an axis mundi, symbolized by the Maya world tree or a phallus impregnating the earth.

The Quadrangle of the Birds East Building 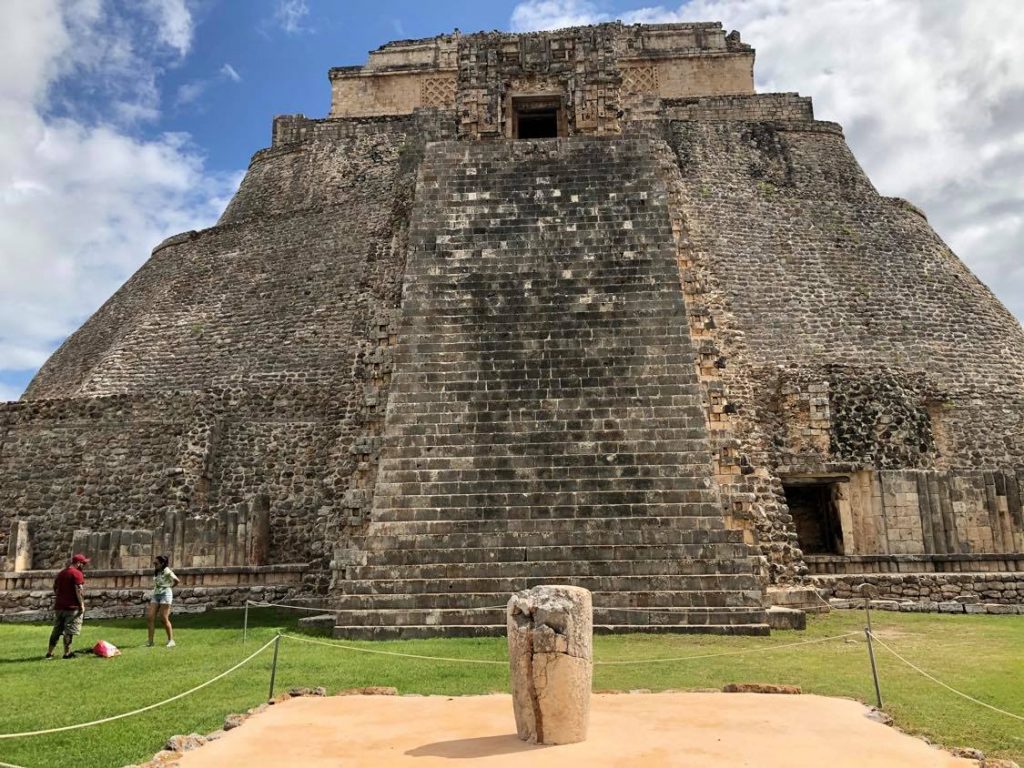 Known as Temple I, the East Building of the Quadrangle of the Birds is the lower west structure of the Pyramid of the Magician. Although it has been mislabeled as a “temple”, it is actually a long, range type building.

Its interior — now mostly concealed by the successive construction of the oval-shaped pyramid — is comprised of twelve inner sanctums. There are five pairs of rooms opening to the west with two chambers attached on the north and south wings respectively opening to the north and south. The exterior facade was decorated in Puuc-style by alternating groups of columns and masks of the rain god, Chaac. Rare surviving remnants of two Chaac figures are still visible above one of the entrances. 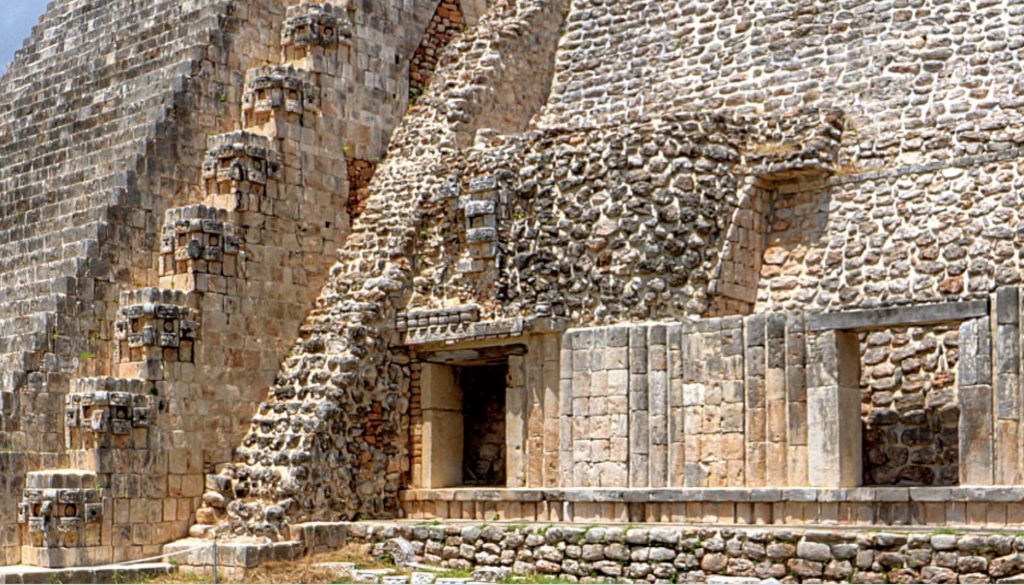 The Quadrangle of the Birds North Building

The original composition of the North Building was made up of three pairs of rooms with an opening to the south.  It’s believed to have been erected during the same period as the South Building of the Quadrangle. 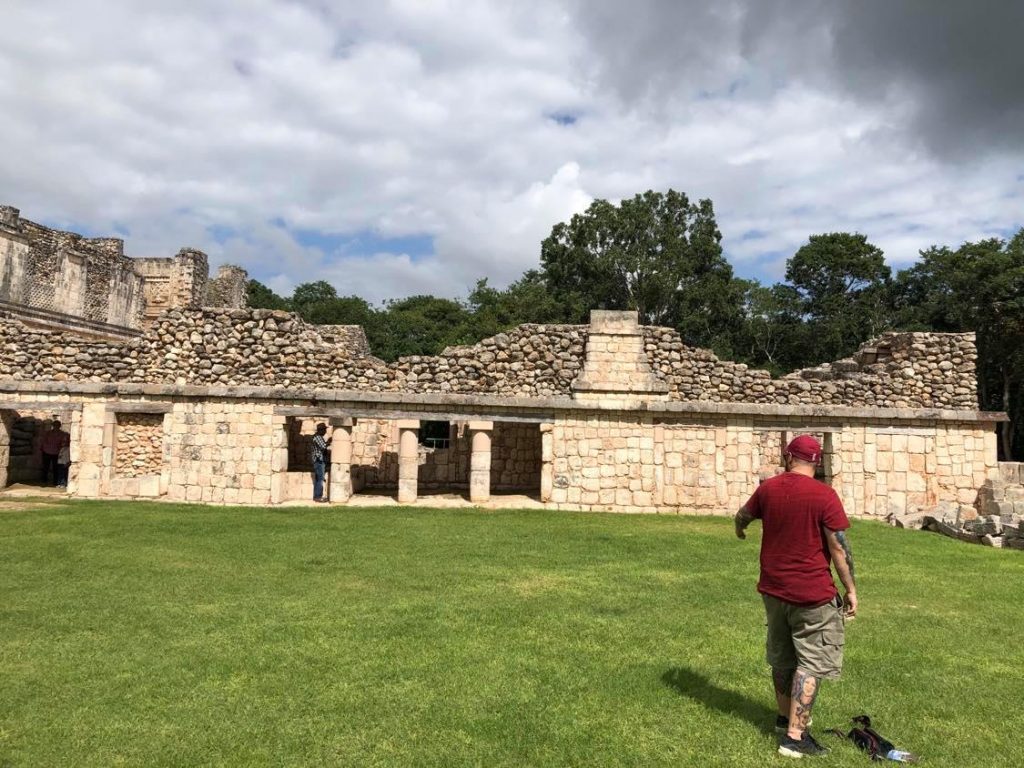 The North building was professionally reconstructed between 1982 and 1994. After the 1993 session, an additional chamber comprised of somewhat different stonework was attached at the west end of the North Building with an opening to the west. The official plaque by INAH (Institute of National Anthropology and History) informs us of the following, “By becoming part of the royal residence, the west end of the same building functioned as the royal kitchen” but I think they were conjuring up something more than food. I deal with this in the symbolism section below.

A forced opening to the north produced a passage from the south but this was also added during the ongoing excavations and restoration. Two additional lateral doorways on the west half of the front facade are now filled in with non-fitting stones of different color and width of cement making modern reconstruction efforts clear. Modern drums and capitals on the columned opening are identified by contrasting stones. There are benches at both ends of the chamber in Room 6 (See plan below) which is unusual for buildings in Uxmal.

Unlike its predecessor, the East Building or so-called Temple 1 attached to the Pyramid of the Magician, the smooth, plain facade of the North building lacks ornamentation and it is smaller in dimensions and height.

The Quadrangle of the Birds South Building 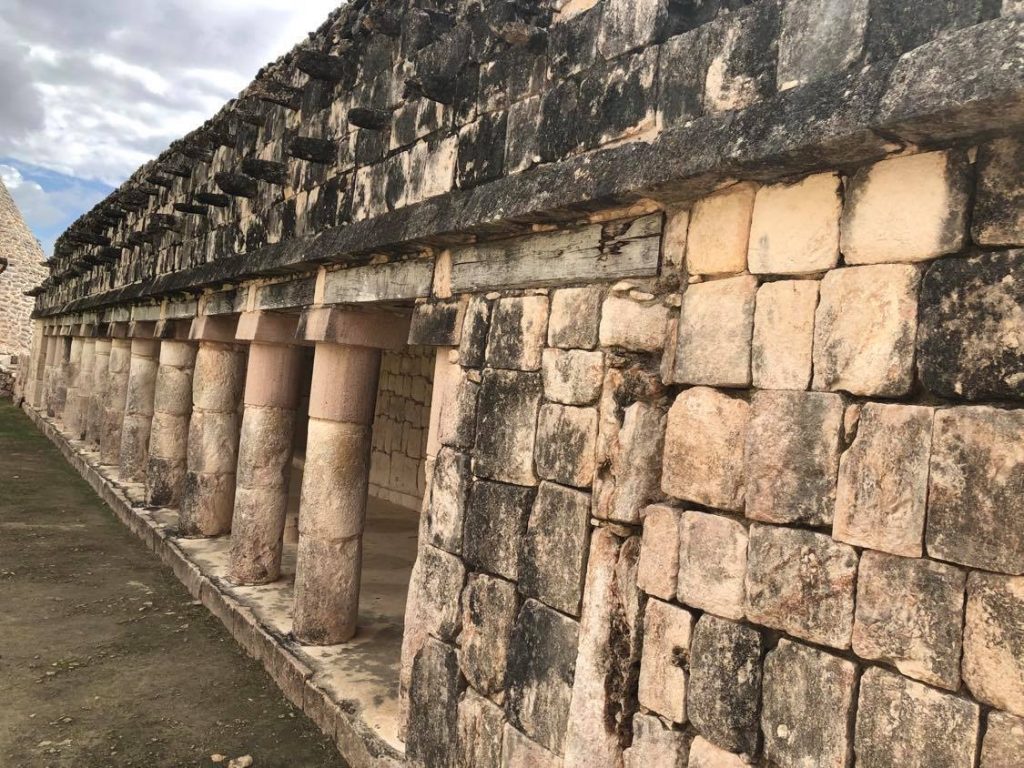 The South building is comprised of three paired chambers with entrances opening to the north framed by a rare colonnade hall covering the entire facade. Thirteen columns (reflecting the thirteen layers of heaven) is an unusual number for a southern structure however, it is vital to point out how the South Building is mostly a modern interpretation and model of recent reconstruction that took place between 1996 and 1997.

Replacement stones in the columns last three columns at the west are distinguished from the original stones below. The columns are similar in style to the seven columns attached to the House of the Iguanas next to the Ball Court in Uxmal.

While looking East along the full length of the colonnade you can see a raised platform on the ground beside the doorway and new wooden lintels and cross beams up above. 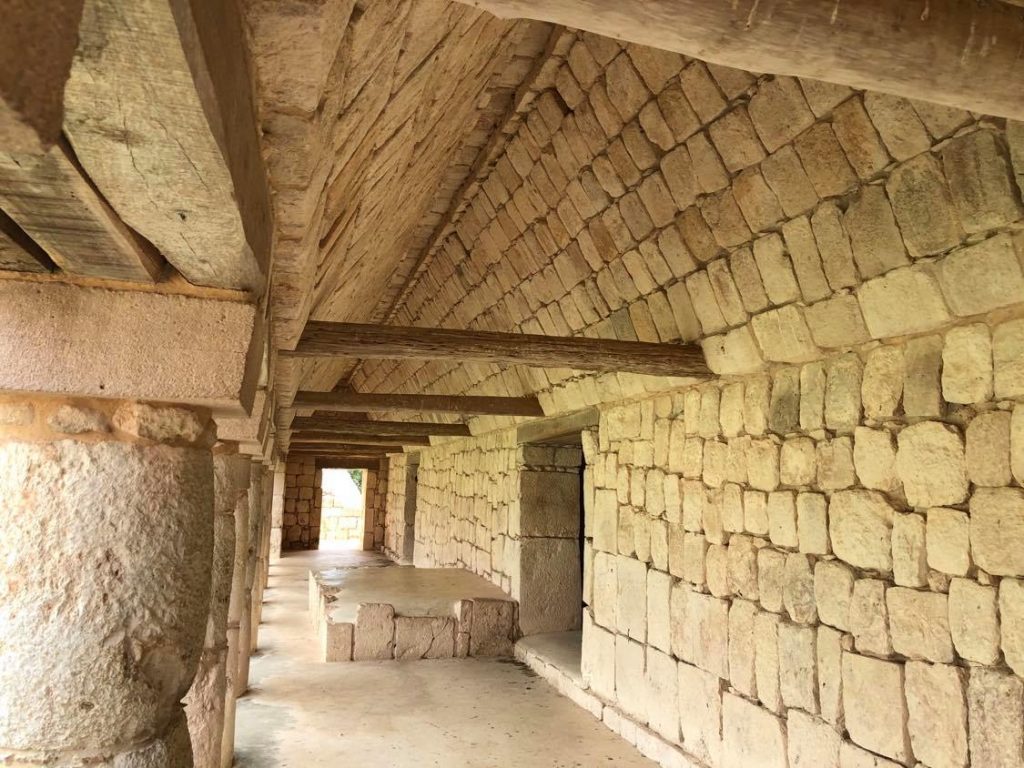 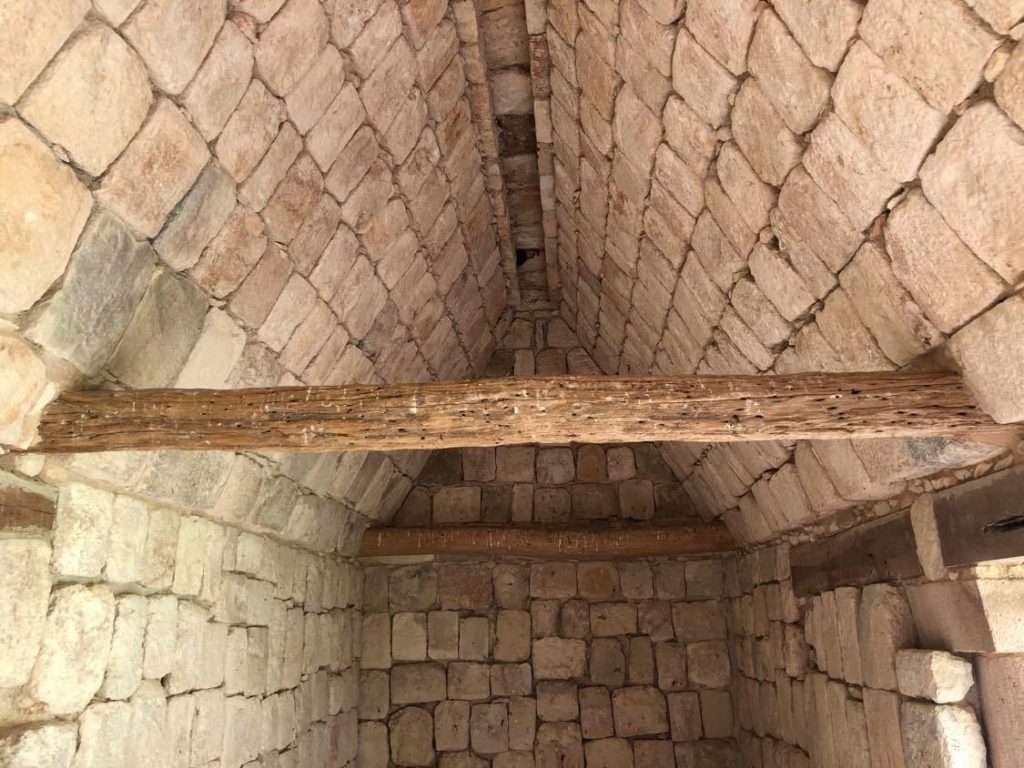 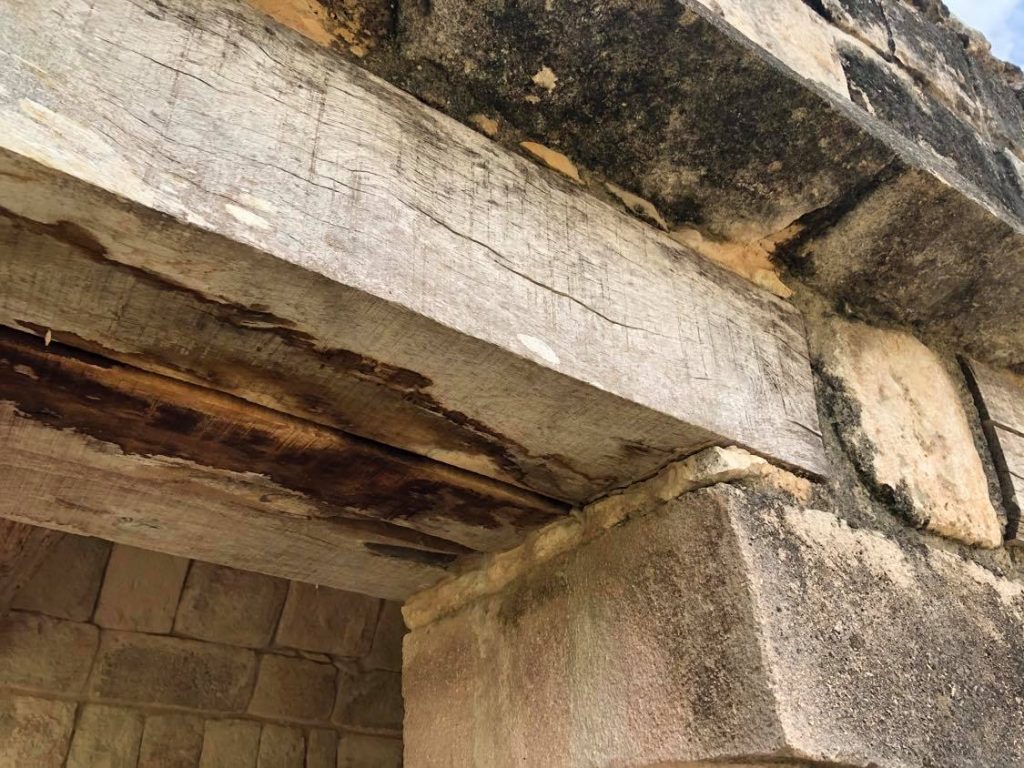 The Quadrangle of the Birds West Building

The West building also known as the House of the Birds is a long, range-type structure with eight rooms divided into two wings (north & south) by means of a vaulted passageway in the center.

Nowadays the lateral doorway on the East wall of Room 6 (See plan below) is filled in with rubble. Not much to see in there, but the colonnette frieze that wraps around the northwest corner of the building is an impressive imitation of organic originals. 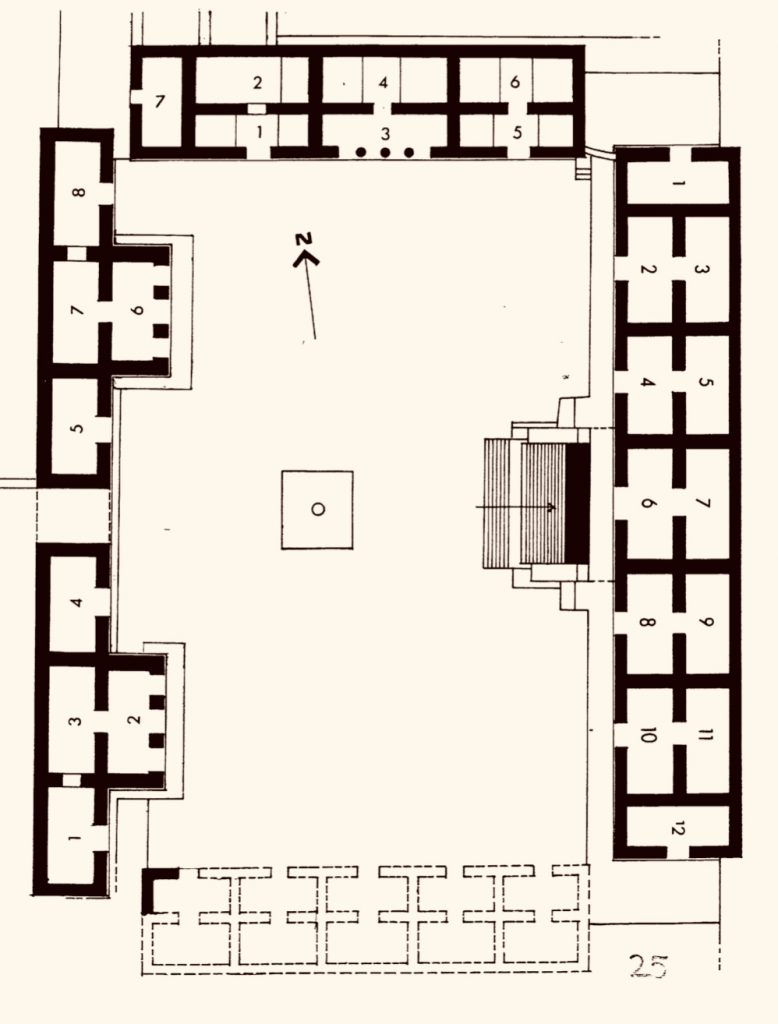 The entrance through either side of the vaulted portal is accessible by means of a Maya arch which aligns with the Pyramid of the Magician. While today it serves to provide tourists with a spectacular backdrop for selfies, it served as the official entrance for the ancient Maya and probably used for observing something more than ourselves. Portals usually represent a gateway between that which is profane and that which is considered sacred space. Temples all over the world are usually built in cosmo-telluric zones where terrestrial forces converge with that of the cosmic, hence the reason why some spaces are considered sacred. 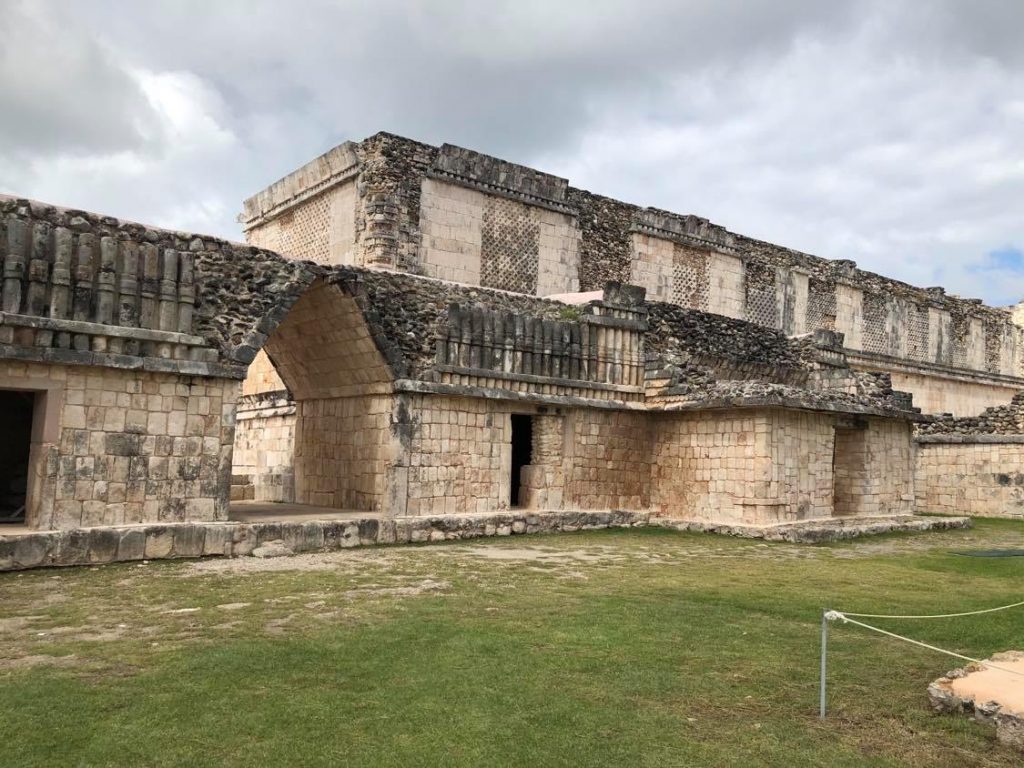 This building forms the west side of the Quadrangle opposing the so-called Temple I of the Pyramid of the Magician and it was erected during the last stage of construction. Excavation and consolidation of this building occurred in the latter part of 1992.

Unlike the other rooms that make up the West Building, two protruding chambers at the center of both wings were originally constructed with three openings, formed by square piers and columns on both sides of a central passage producing a triptych doorway, a subtle reminder to center oneself by reconciling opposites before crossing the threshold into sacred space. 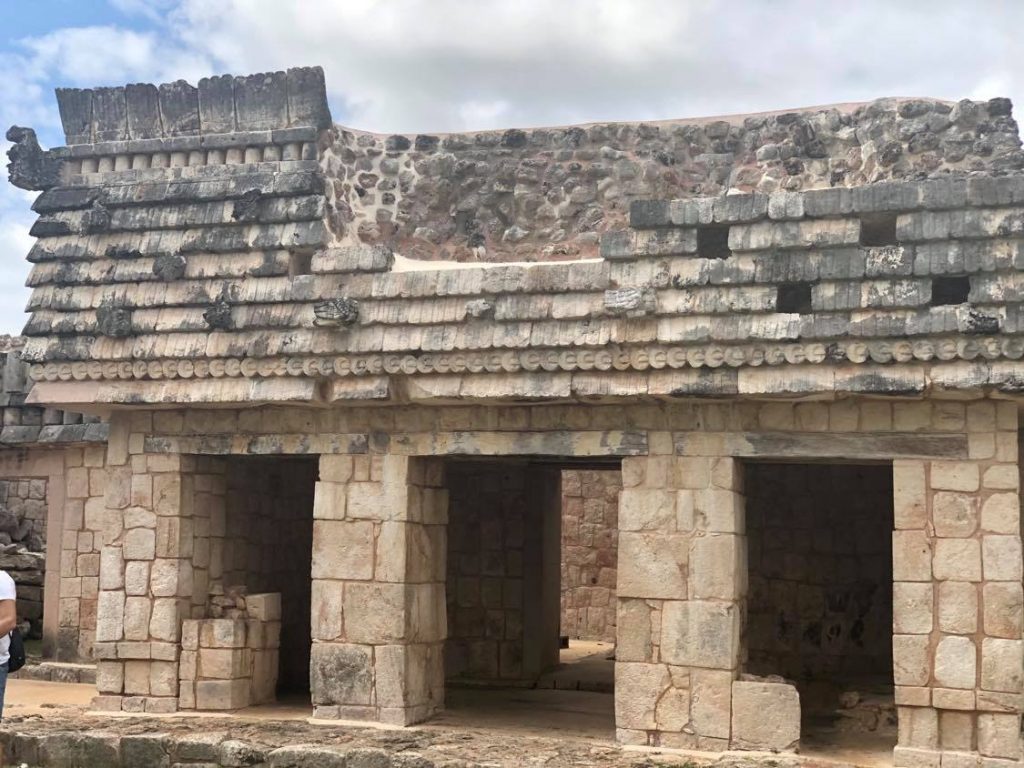 The two projecting chambers make up the last phase of construction and not only stand out physically but also aesthetically with rich decoration on the cornice, resembling a roof of feathers or palm leaves, along with small drums or colonnettes which are typical for Puuc-style with the exception of alternating bird sculptures from which the Quadrangle receives its name. 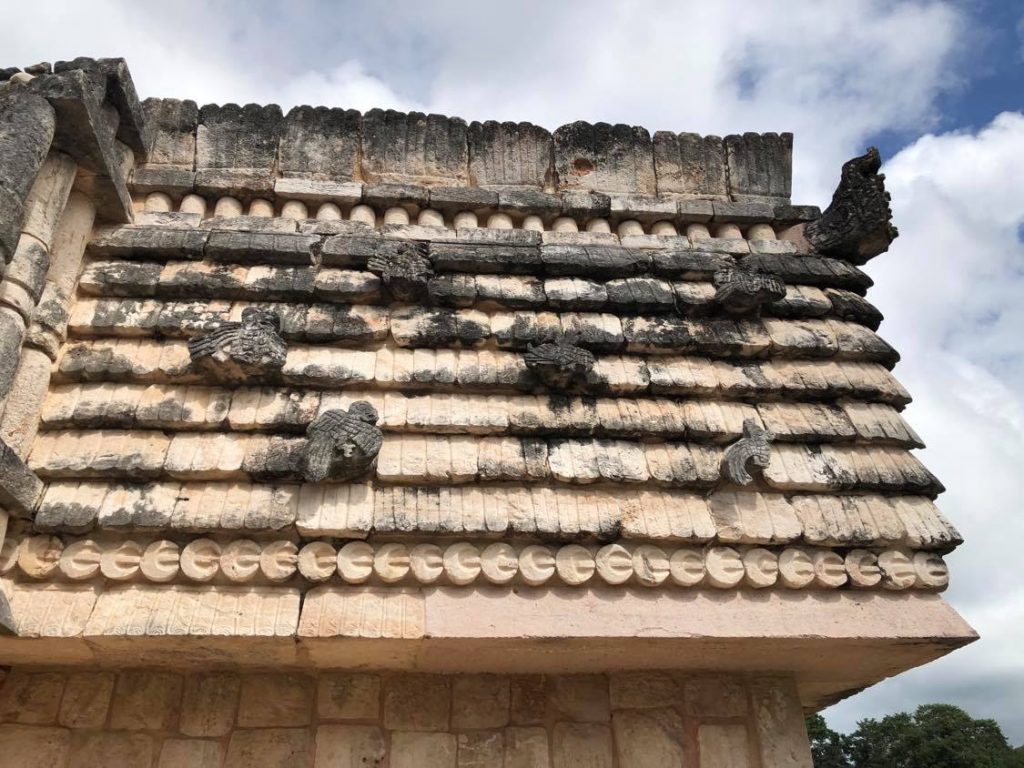 Some of the birds on the frieze have a 3-dimensional treatment in contrast to others that are only 2-dimensional. At the bottom, the architrave has crescent moon shaped motifs representing grains of maize while overhanging from the corner of the upper tier is a serpent’s head with open jaws.

The serpent is a creature of the earth and it is juxtaposed against the birds, a symbol of both the sky and the spiritual world giving meaning to this building. The same principle embodied in Kukulkan / Quetzalcoatl is represented here in a single frieze.

On the frieze, we find a hodge-podge of bird species including parrots, macaws, eagles, turkeys, and quetzals which are renowned for their iridescent feathers, often used to adorn the headdresses of the Maya elite.

The Symbolism of the Quadrangle of the Birds

According to the symbolist school of thought, anything with wings typically represents an aspect of the spiritual realm. The primary symbolic function of birds is as messengers from the other world, from the gods or Neters. It should come as no surprise that Hermes, a conduit between worlds and messenger of the Gods, “invented” the alphabet by observing the flight patterns of birds, cranes in particular. And of course, in Egypt, Thoth who was depicted as a man with the head of an ibis was the inventor of the sacred medu-neter or hieroglyphic language gifted to man.

In Jung and his Symbols, Joseph L. Henderson describes birds as “the most fitting symbol of transcendence. It represents the peculiar nature of intuition working through a “medium”… an individual who is capable of obtaining knowledge of distant events…by going into a trancelike state”

Pigeons and doves — associated with the feminine aspects, love, and peace — have carried messages for thousands of years. It was written how Noah released a dove to determine how far his ark was from land.

In Egypt, the Hoopoe bird long had an association with magic and the supernatural world. A recent study shows how the Hoopoe is able to detect the minute piezoelectric charges in the atmosphere which can determine a storm or earthquake up to ten hours before the event, thus confirming the ancient aspect of the bird’s symbolism.

For the Mexica (Aztec), who without question had influence among the Maya, the hummingbird was associated with Huitzilopochitli, whose name means “the hummingbird from the left”. The “left” in this case is a reference to the otherworld which runs parallel to the known universe. He was conceived of feathers that fell from the sky. And to the Toltecs, turkey was “the jeweled fowl” because of its shimmering color. It was only eaten during specific festivals and ritual occasions. Its bones were saved for music instruments, particularly whistles and its feathers used for ornamentation.

For the Maya, the emblem of turkey was used in their sacred codices to symbolize fertility and the actual bird was decapitated in rituals designed to ensure that the Gods would provide an abundant harvest.

When the great poet and mystic, William Blake once wrote, “How do we know but every Bird that cuts the airy way is an immense world of delight closed to your senses five [five senses]” he captured the very essence of the qualities underlying the symbolism of birds who we not only see during scenes of daily life but who as messengers of the divine have more than meets the eye.

Given the symbolism implied by its orientation in the west, triptych doorway, and adornment of birds, there can be no doubt that this building was used as a place to commune with the otherworld and therefore could better be understood — esoterically — as the House of Divine Communicators.

Location of the Quadrangle of the Birds in Uxmal