The Great Pyramid in Uxmal 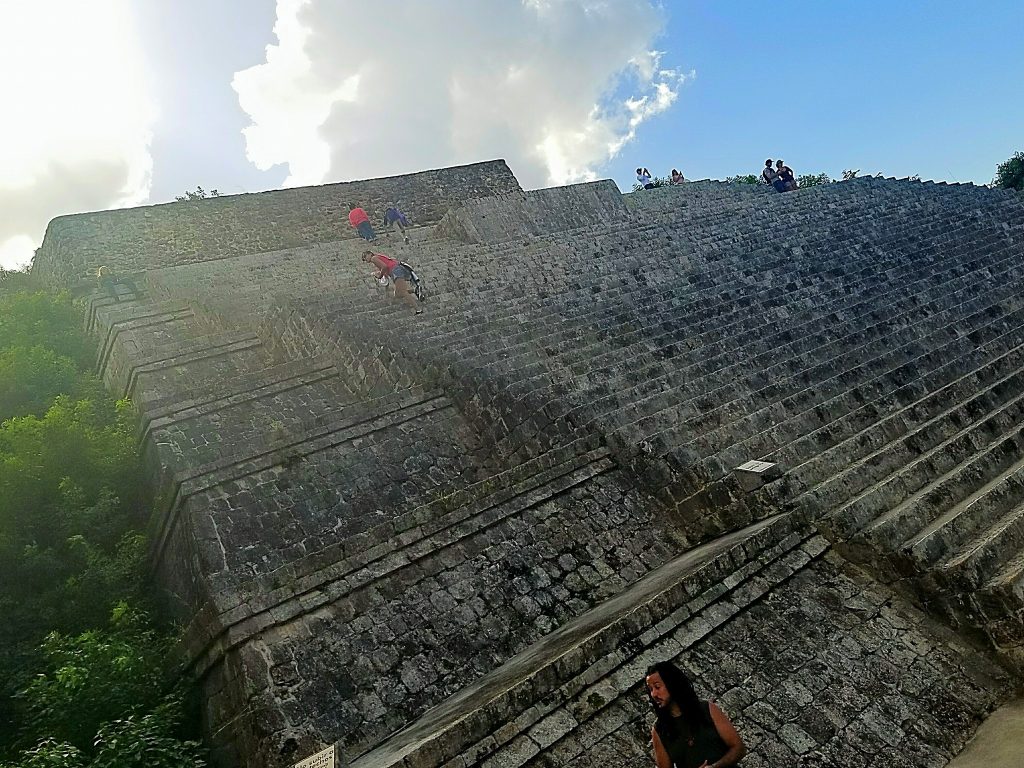 Can you climb the pyramids at Uxmal?

Towering behind the Governor’s Palace in Uxmal, measuring 96 meters (314 feet) wide and 27.5 meters (90 feet) high from the north base to the summit, an enormous mound of stone and earth form the Great Pyramid. Although massive in girth, the amorphous yet more typical Maya pyramid is still shorter than the Pyramid of the Magician.

At the top — this one you can and should climb — a small temple is decorated in a most unusual way. That it was a sacred place to commune with higher spiritual realities is implicit in its symbolism. The spectacular view offered from the peak of the pyramid is not only fit for a shamanic ruler but also provides a perfect place to meditate (and transcend) like one. 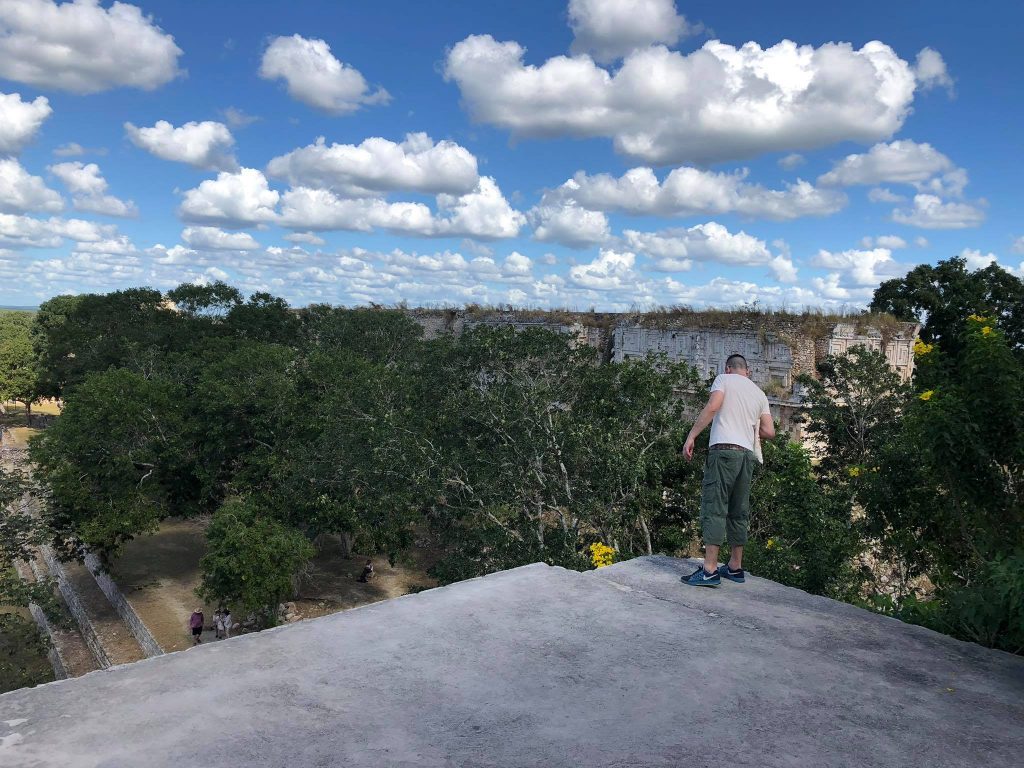 While the pyramid is approachable head-on from the Ball Court in Uxmal, we take an alternative route for a more thematic purpose during our esoteric symbolist study tours of the Yucatan.

Approaching from the path located south of the Governor’s Palace one gets a more palpable sense for what early explorers, John Lloyd Stephens and Frederick Catherwood, would’ve experienced when coming face-to-face with such a buried beauty pre-restoration. It is from this view, one can truly appreciate how the partially excavated pyramid — overtaken by dense vegetation — has the power to prompt our imagination in a way that the more polished pyramids elsewhere simply do not.

History of the Great Pyramid in Uxmal

In 1941, Sylvanus G. Morley partially cleared away the peak of the Great Pyramid and reported on a row of four rooms in the northwest corner which are still yet to be re-discovered. As George F. Andrews suggests in his architectural survey at Uxmal, “Morley was simply mistaken in his location of these rooms, which must be at a lower elevation and further to the west” and therefore the elusive rooms remain in ruins buried under piles of rubble until further work can be done. Most of the structure is left untouched for the purpose of stability. However, chambers on the upper level and the north face stairway were restored by INAH (National Institute of Anthropology and History) with Cesar Saenz as project director in 1973.

Unlike the south side of the Great Pyramid, which according to Morley only had ten terraces due to a rise in the natural terrain, the north face originally had eleven terraces even though nowadays the structure appears to be comprised of only 9 stepped levels and a wide stairway exposed to the north.

It’s hard to say exactly when the structure was first erected but the fact that the Great Pyramid predates the Governor’s Palace is evident because the platform of the latter partially overlaps the lower terrace in the Northwest corner. 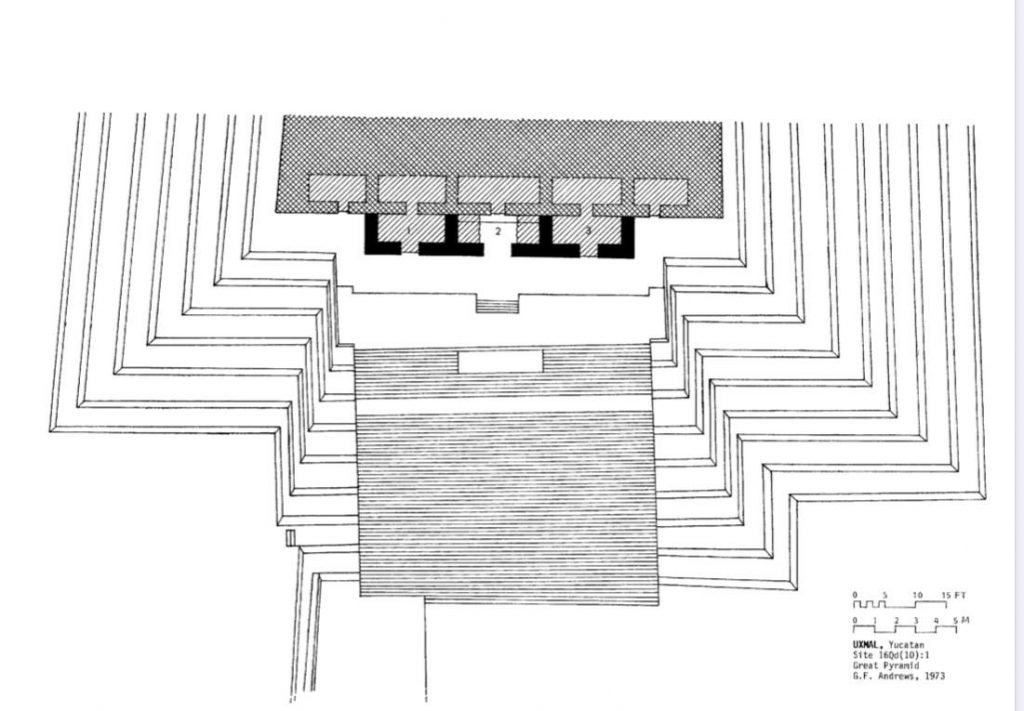 At the top of the highest terrace of the pyramid is a platform supporting an 8th-century temple with a huge, central solid core surrounded by eight chambers. Known as the Temple of the Guacamayas — the Spanish word for macaw (or parrot) — the structure originally had five rooms on the north side, but only one each on the east, west, and south sides. The solid core rises 1.7 meters (5 feet, 5 inches) above the roof level of the rooms. An additional row of three rooms was built in front of the original central rooms on the north side.

While the small central room contains a ubiquitous, long-nosed Chaac mask, the exterior facade features unique details uncommon not only to Uxmal but the entire Puuc region. A narrow serpent body molding divides the larger wall area into smaller panels while an unusual interplay of mosaics and macaws — which give the temple its name — appear in vertical, horizontal, and upside-down positions, perhaps representing the three-tier world-view of the Maya. 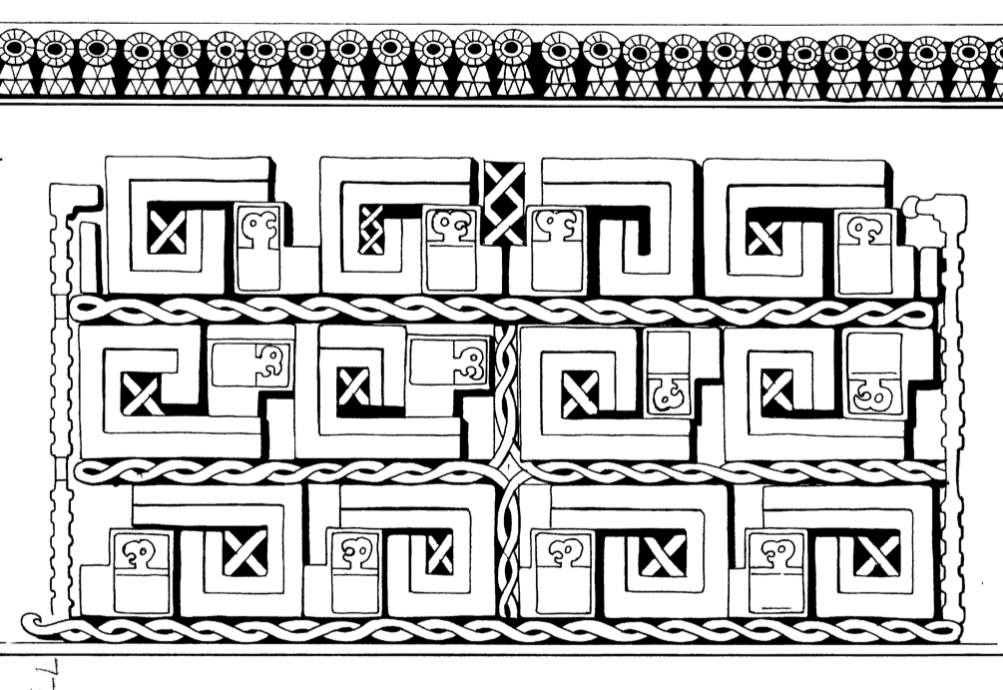 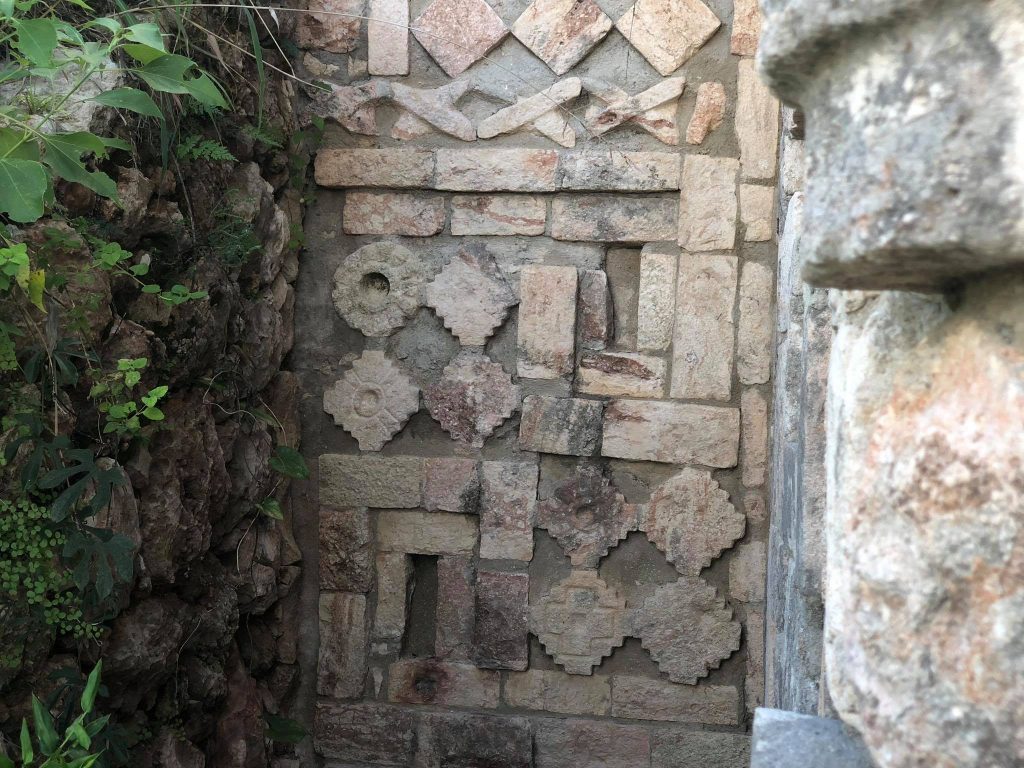 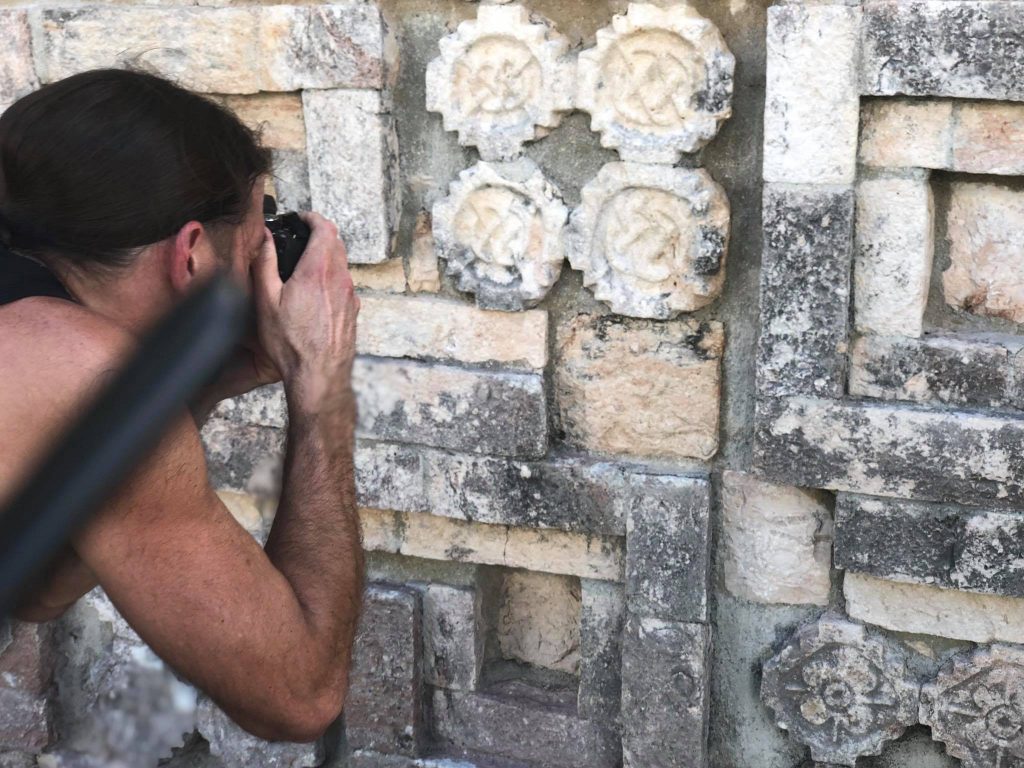 The step frets are without question typical for mosaic style buildings but never seen alongside sculpted birds whose symbolic qualities I have already covered in the Quadrangle of the Birds article. The short version is that in the symbolist approach, anything with wings typically represents aspects of the spirit world and birds, in particular, are often attributed with being messengers of the divine making this a place for cosmic communication. Anthropologists have long known it was only the high priests, dignitaries, and the king himself who could access the highest levels of a pyramid or mountain to become one with the gods.

Symbolist Interpretation of the Great Pyramid in Uxmal

In the Popul Vuh — the creation myth of the K’iche’ Maya — the Hero twins were given a lit torch of pinewood and a lit cigar with the request to return them the following morning, but instead, they placed glowworms on top of their cigars and attached macaw feathers on the tip in an attempt to deceive and defeat the Lords of Xibalba. Macaws, which are native to Mexico and Central and South America, were associated with fire and the sun because of their very vivid, bright colors. In both the Dresden and Madrid codices, images of macaws are depicted bearing torches.

Fire is the initiating principle, the one to bring about change. For the Maya, the fire was a means for cosmic communication. The Maya would ritually blood-let onto a paper which was then burned so the rising smoke could carry messages to the divine.

The pre-Socratic Greek philosopher, Protagoras made famous the claim that “Of all things the measure is Man, of the things that are, that they are, and of the things that are not, that they are not” and taught this idea, simply rendered as “Man is the Measure of All Things”. However, Jose Diaz-Bolio doesn’t entirely agree to assert that “this idea had an exception in the land of the Maya, for man and the Ahau Can serpent were the measure of all things”. Diaz-Bolio who refers to the Great Pyramid as the “Zamna Pyramid”, believes one of the panels on the temple’s facade depicts tiny round solar faces — each representing a cardinal direction —surrounded by stylized rattles of the crotalus durissus.

Of particular interest for the symbolist, are the triple-stacked corners masks depicting the ubiquitous image of Chaac which are unusually round. Each contains what could be a Pauahtun (Pawahtun) or God N emerging from the monster mask’s mouth. The Pauahtun had four aspects known as Bacobs (Bakabs) assigned to the four cardinals directions where they held up the sky. Another possibility for the emerging figure is Kukulkan as the eyes are surrounded by the Venus glyph. The planet is assocaited with rebirth of the spiritual leader. 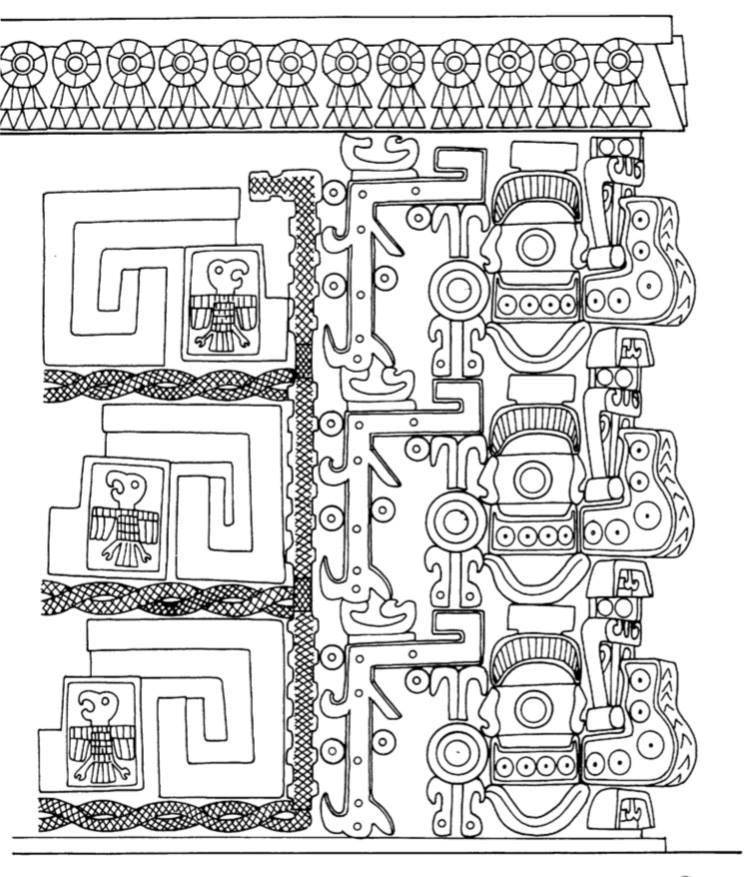 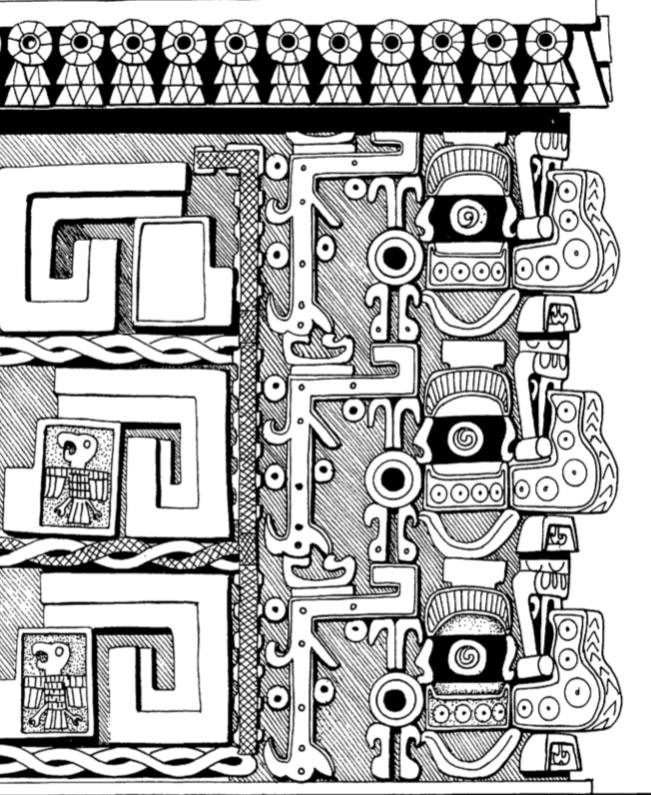 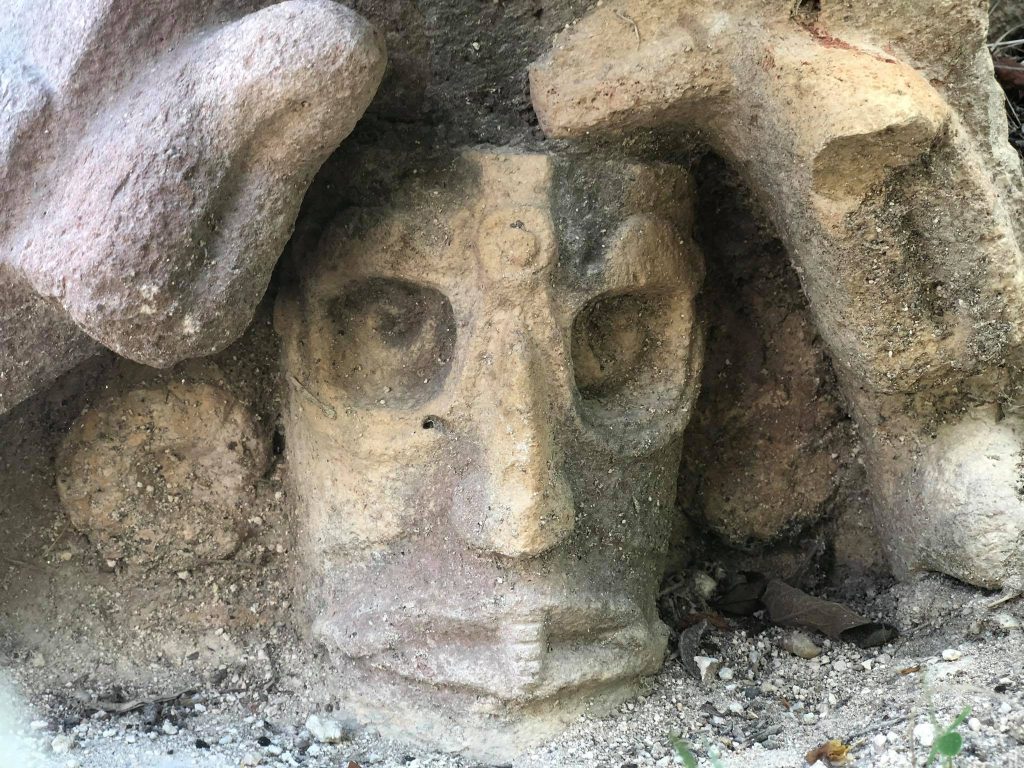 The Great Pyramid of Uxmal would have been even greater had building activity not experienced an abrupt halt. In its final phases of construction, the rooms and doorways on the upper level were filled in with dry-laid rubble before a final coat of rubble — about 1.5 meters (5 feet) thick — covered the entire pyramid in a stepped form. This means the building we see today was meant to serve as a substructure for a new pyramid on top of it, but something caused the ancient architects to cease the operation before this could occur. Whatever that cause was, it remains a mystery.

Location of the Great Pyramid in Uxmal