The Ball Court in Uxmal

The Ball Court in Uxmal is a medium-sized monument built between 890 and 915 A.D. by Chan Chak K’ak’nal Ajaw, also known as Lord Chaak or Chac. It is an archaeological gem and one of two Ball Courts discovered at Uxmal.

Leaving the the Nunnery complex, exactly opposite the portal of the Southern temple, a series of steep steps lead down to a long narrow open-ended alley formed by two parallel stone structures with a horizontal, vertical and sloping face defining the court where the Mesoamerican gall game was played. Beyond this, a man-made mound can be observed in the near distance upon which rests the House of the Turtles and the Governors Palace also built by Lord Chaak. 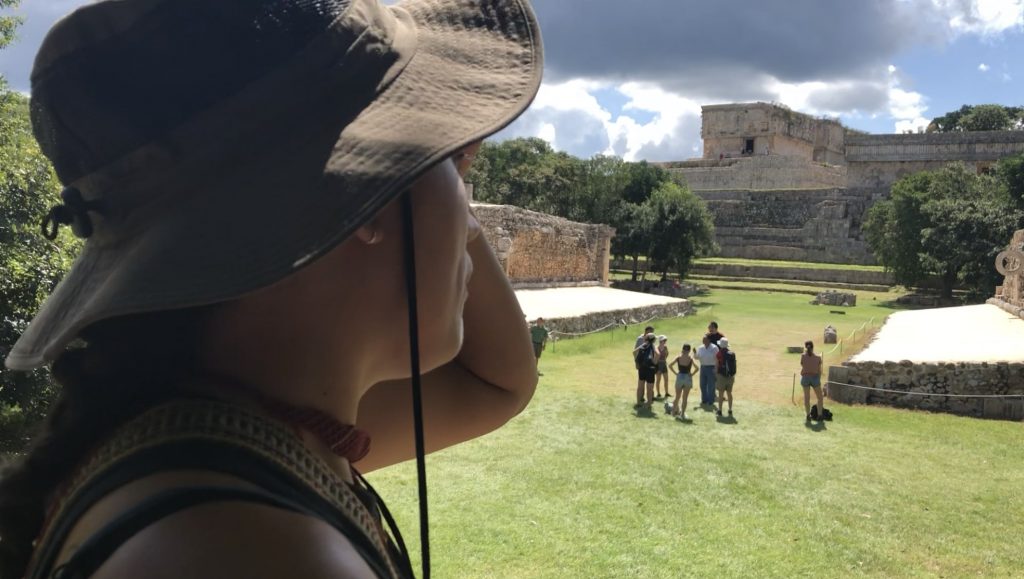 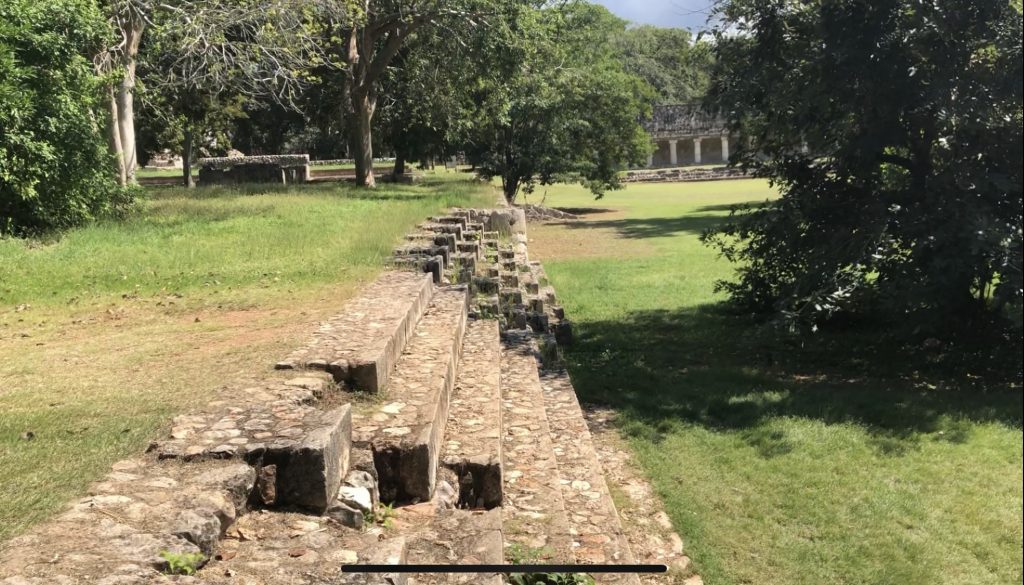 Inscriptions on the stone ring marker, now replaced by a faithful reproduction are among the most significant epigraphic evidence found at Uxmal. Apart from artistic quality, it is important for the historical information it divulges: for the inscription bears the date 905 A.D., the proposed commemoration date for the ball court.

The second ball court located west of the Dovecote and hidden from public view now lies in ruins, although further excavation in this group which includes a round temple – unusual to the puuc zone – may provide more clues to Uxmal’s lost origins.

All over Central America, for some three thousand years the Mesoamerican Ball game, known to the Maya as Pok-ta-Pok was played with a solid rubber ball whose diameter varied between 4 to 13 inches and can weigh between 1 to 7 pounds. The ball game was the first team sport in history, as far as historians know, dating all the way back to the Olmecs, who thrived between 1,200 B.C.E. to 400 B.C.E. Ball courts have been found from Nicaragua to northern Arizona in the United States. Variations of the game are still played in parts of northwestern Mexico today however, the meaning of the game may have degenerated over long periods of time since its original inception.

The idea of the game is for the player to get the ball through the stone rings or markers set on either side of the court, even though the ball could only be touched with hips, elbows and knees by players who wore protective clothing made from leather, wood, wicker and cotton to cushion the impact. Some players even wore stone yokes around their waist.

According to the usual explanation, the ball game was a competitive sport played to avoid physical sacrifice where the heads of defeated enemies, captives, or potential team captains were severed, yet scholars still can’t decide if it was the winning or losing team members who lost their head in human sacrifice. That is certainly one way of looking at it, but what if instead we look at it from a higher scale? 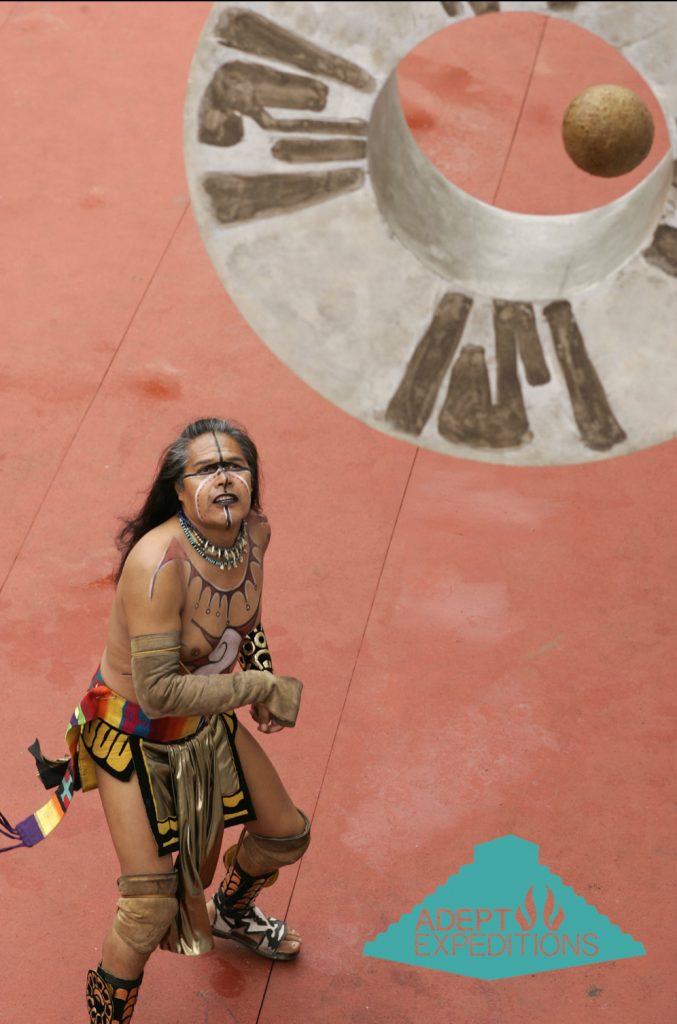 What if instead we take on a more shamanic point of view; guiding not the losing ball player to a physical death, but an initiatory drama guiding the initiate through the process of becoming from which one returns with the ability to heal after having communed with those on other planes of existence through a life giving offering. For the symbolist, it was not about a physical death, but a symbolic death to the profane; to the limited faculties of our cerebral intelligence.

According to the orthodox explanation, the ball game was a competitive sport played to avoid physical sacrifice where the heads of defeated enemies, captives, or potential team captains were severed, yet scholars still can’t decide if it was the winning or losing team members who lost their head in human sacrifice. That is certainly one way of looking at it, but what if instead we look at it from a higher scale?

“Accordingly, there are many revisions to be brought to our judgements regarding ancient peoples of whom only traces remain, such as the Maya and the Inca.”

In the central theme of the Popol Vuh, creation myth of the Kʼicheʼ Maya, the Hero Twins descend to the Underworld where the the ball game is played against the Gods in order to avenge their father’s death who is resurrected through the process. Their father is the Maize God symbolizing the divine in mortal form; he is the personification of physical creation and it’s cycles of becoming and return, death and renewal. Therefore, by resurrecting their father from the court of his so-called death, it is inferred that the game is a metaphor for life, death and regeneration. 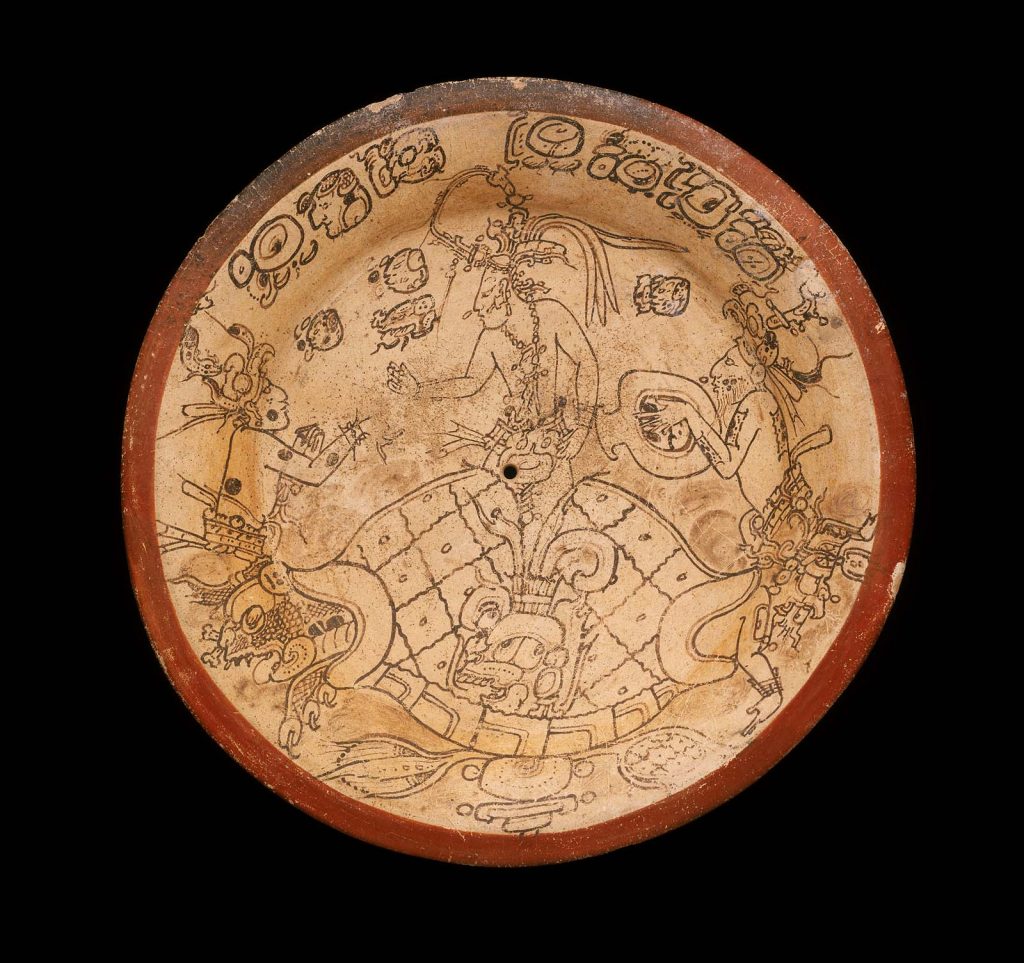 The game was not merely a competition between players but a cooperation between the movement of heavenly bodies, particularly the particularly the Sun, Moon and Venus. Cosmologically speaking, the ball court conveys the same principle as the turtle carapace from which the Maize God is reborn, representing the primordial scission and the ball itself, a symbol of the sun journeying across the sky, each day rising and setting in and out of the Underworld.

Esoterically speaking, the game itself is best viewed as a spiritual metaphor for the stages of creation lending weight to greater cosmology encoded at Uxmal connecting the Nunnery Quadrangle to the House of the Turtles.

Location of the House of the Ball Court in Uxmal