The House of the Turtles in Uxmal 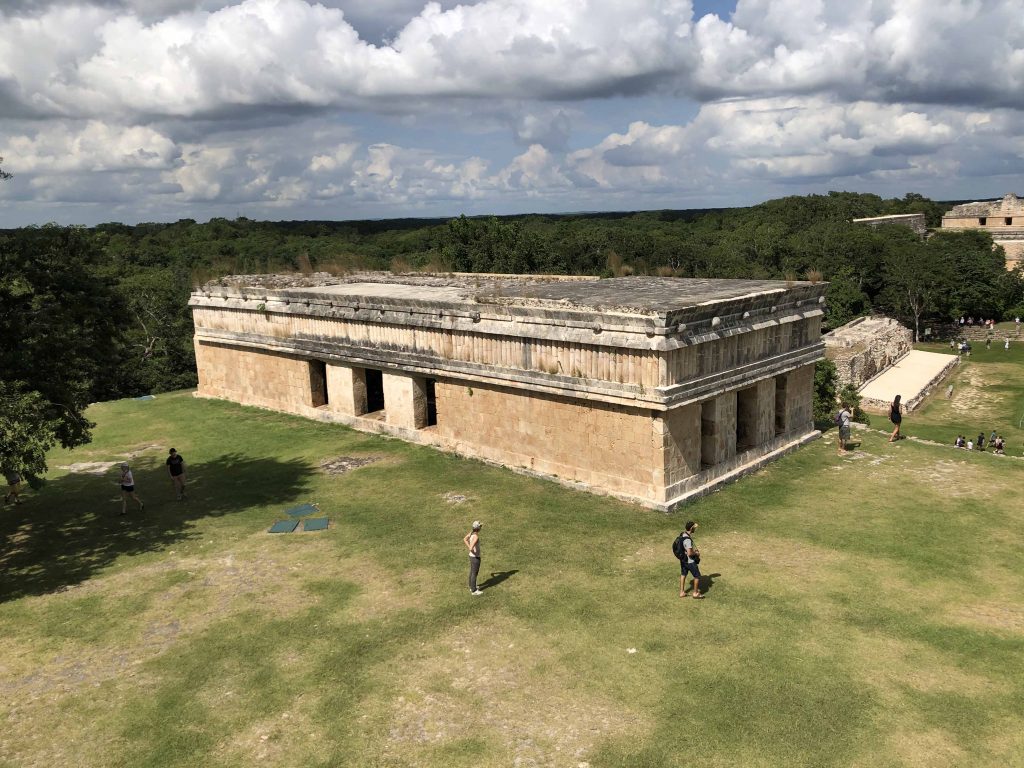 The House of the Turtles is an uncomplicated but stylish ceremonial temple measuring 11 by 30 meters (36×98 feet) with a composition of 7 interior chambers. The temple is unusual in having doors on all four sides and in having a direct passage through the front, interior, and back doorways. The central passage is orientated on a north-south axis and aligns to the Ball Court and the Nunnery Quadrangle conveying symbolic significance.

The House of the Turtles is located on the same raised platform as the Throne of the Jaguar, but situated to the north west, slightly behind the Governor’s Palace and is one of the most simply decorated temples in the city of Uxmal. 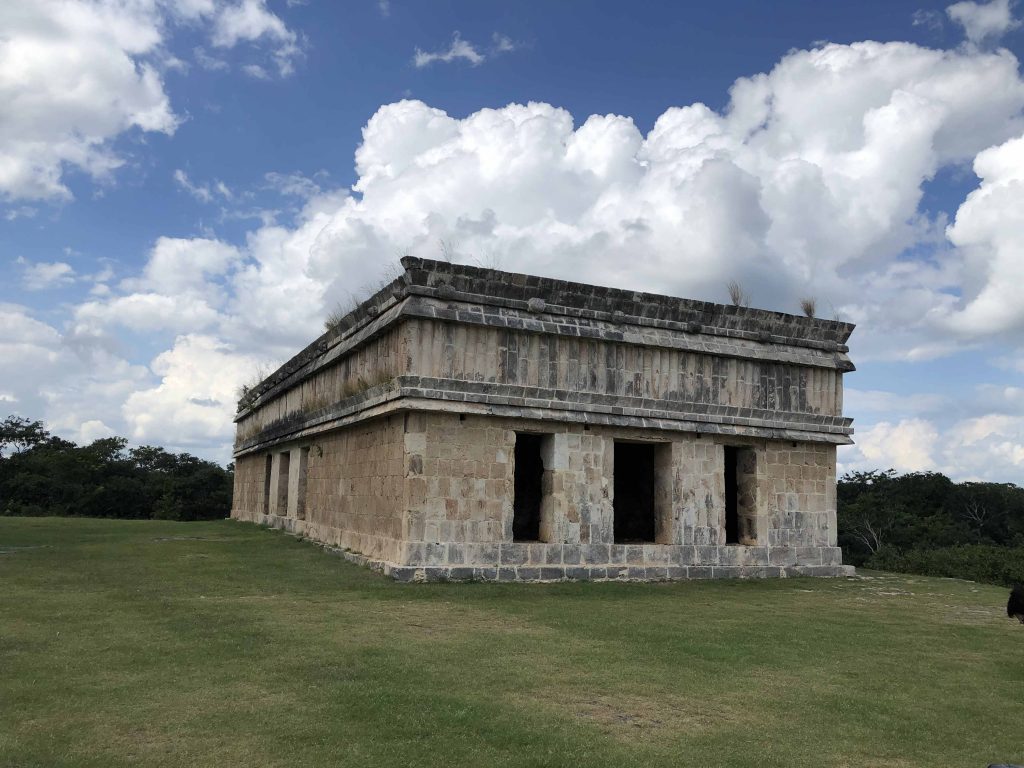 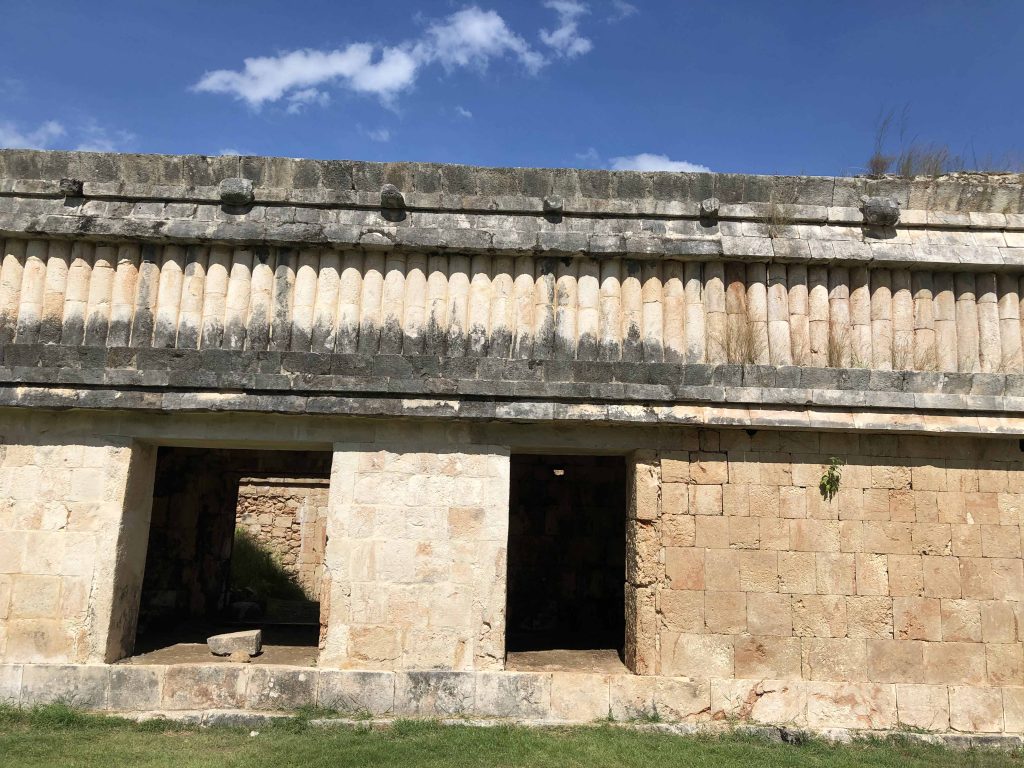 The lower half is impressive despite its austere simplicity and very much unlike the upper part which is gracefully decorated with a frieze of continuous columns, crowned by a cornice adorned by a series of turtles from which the sacred temple receives its name.

When was the House of Turtles in Uxmal Built?

The dating of the temple remains a mystery. The official plaque provided by INAH points to an architectural style corresponding to the late phase of the flourishing Puuc style or late Uxmal period between the years 900 – 1000 AD

However some scholars believe the House of Turtles was been built between the years 800 and 900 AD, but I think it could be much older. Evidence revealed from the recent discovery of a new secret passage Inside the Governor’s Palace demonstrates how structures built on the same platform as the House of Turtles are nearly 200 years older than expected. Could the same hold true for the temple of turtles?

The excavation conducted by the Uxmal Project in late 2019 found architectural elements estimated to date as far back as 670 AD. If this estimation is indeed correct, and I believe it is, then this would prove that already in the seventh century “the inhabitants of Uxmal were able to erect incredibly complex buildings” as the archaeologist and co-director of the Uxmal excavation, Lourdes Toscano has implied. 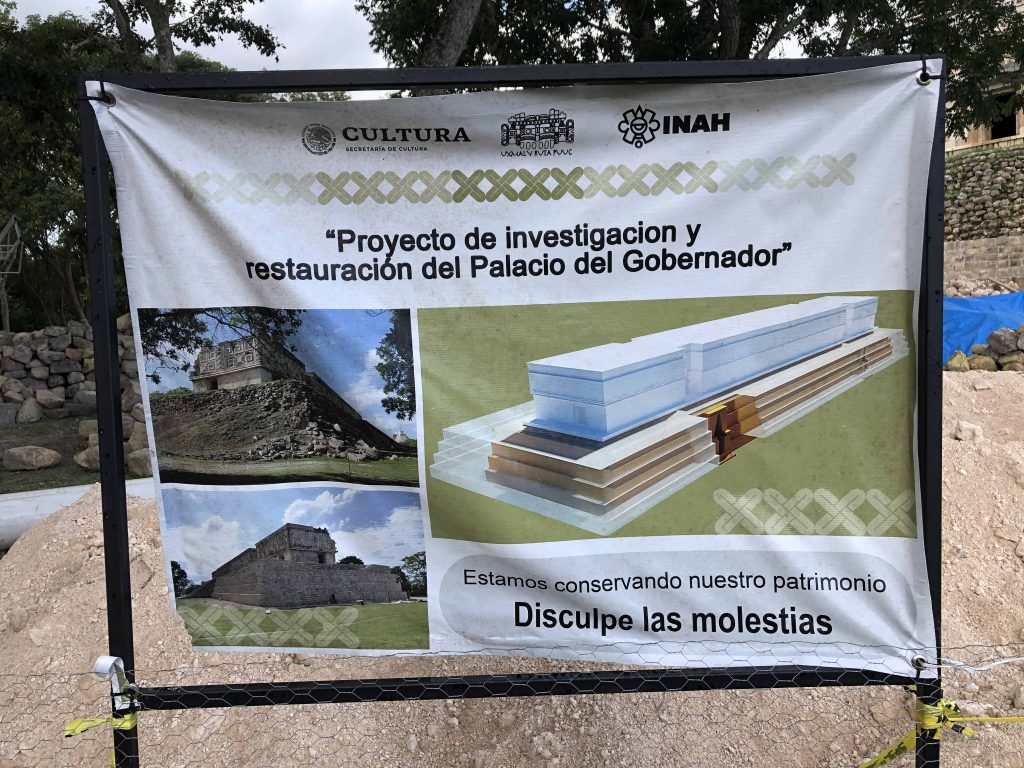 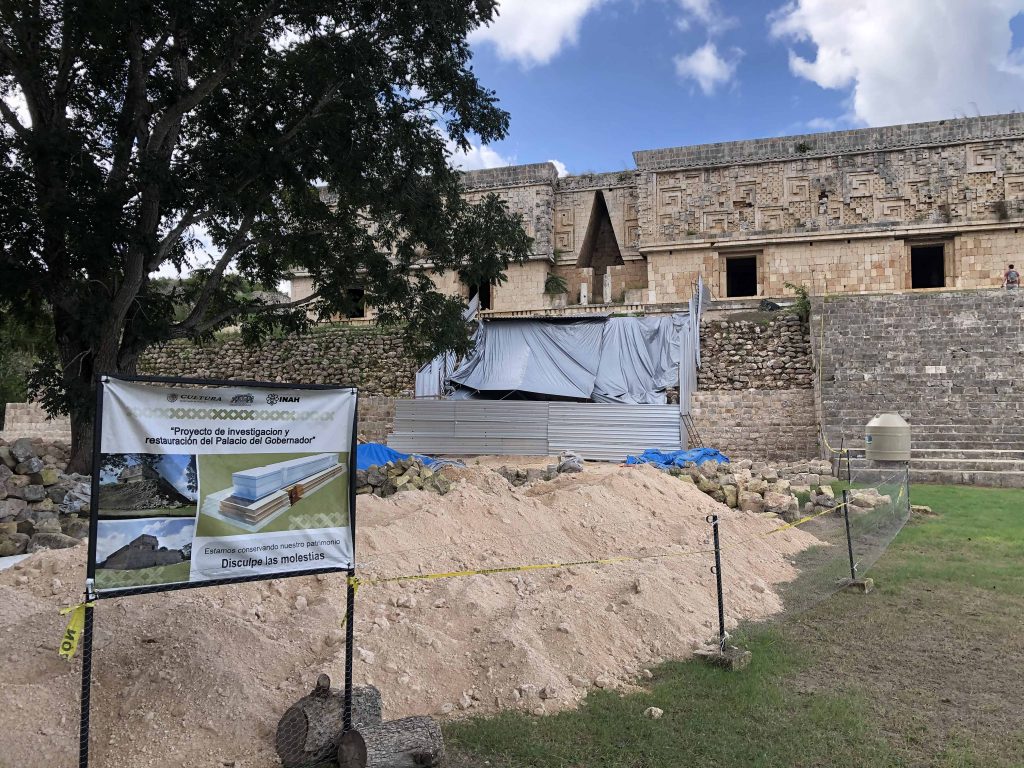 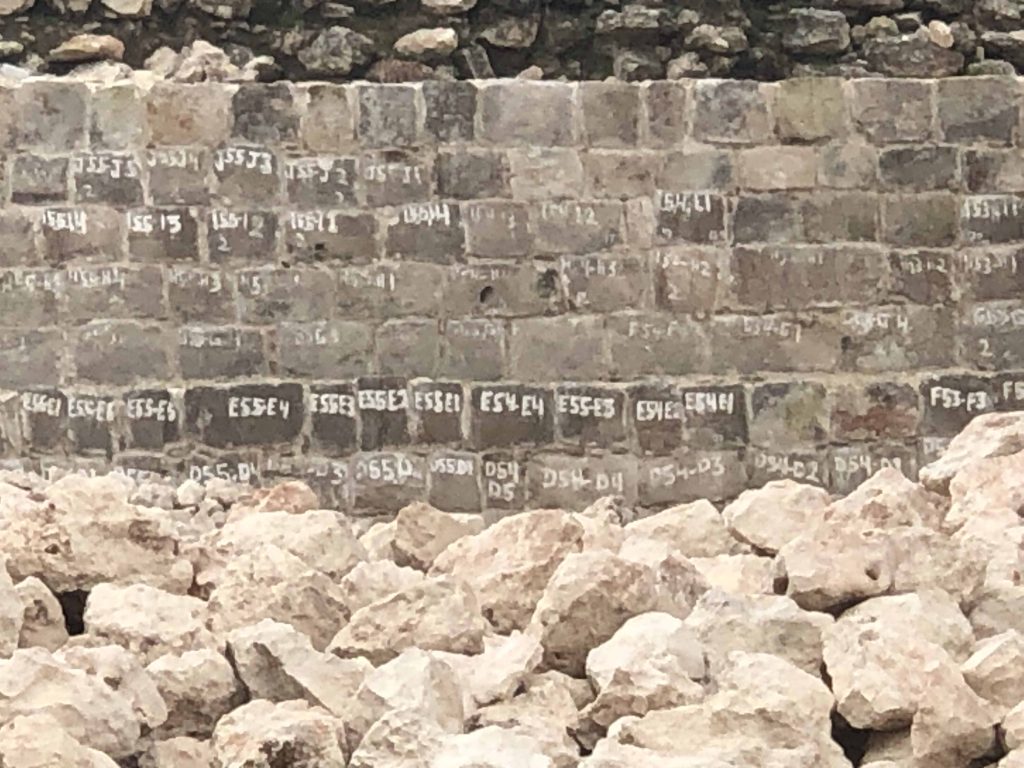 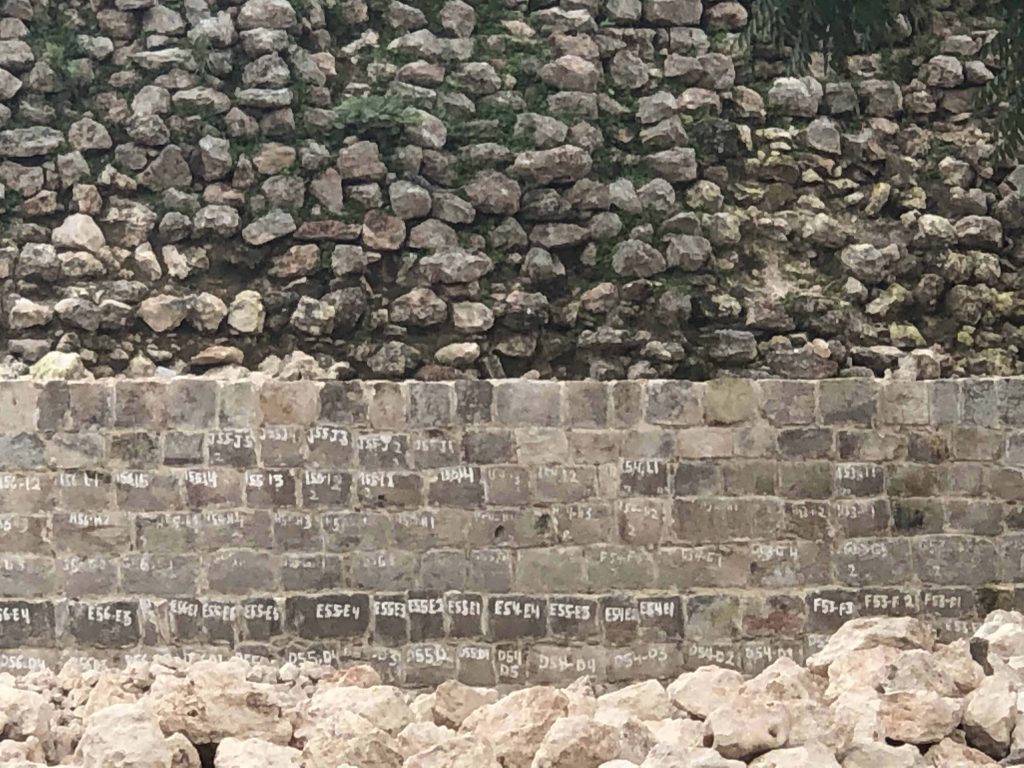 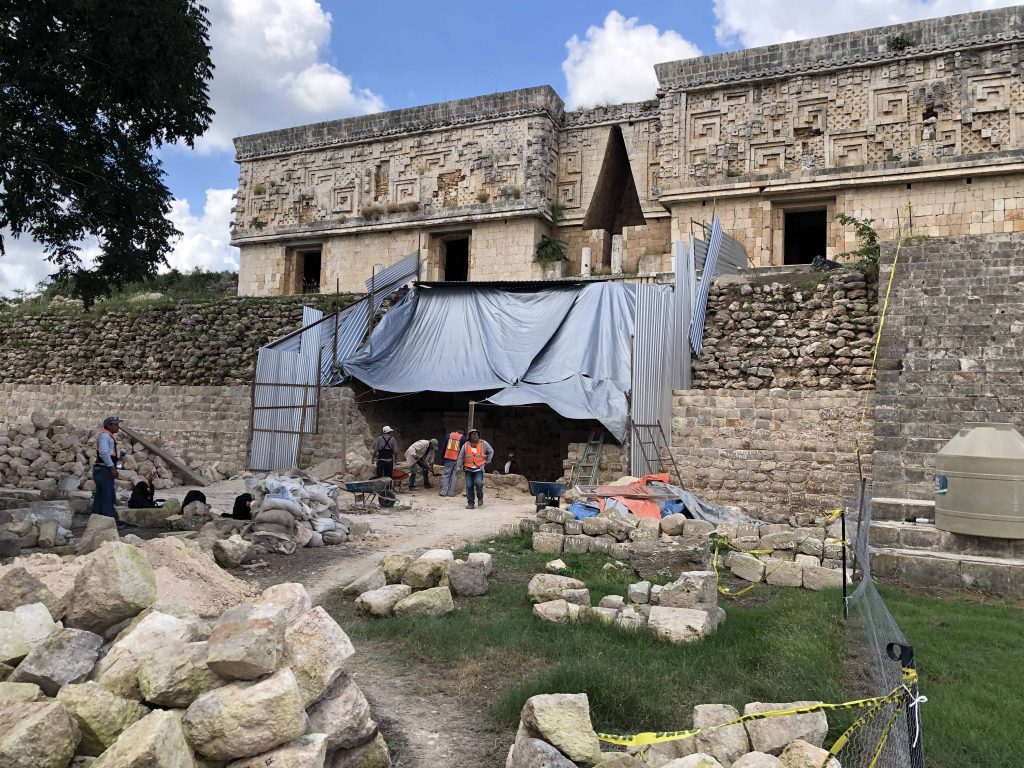 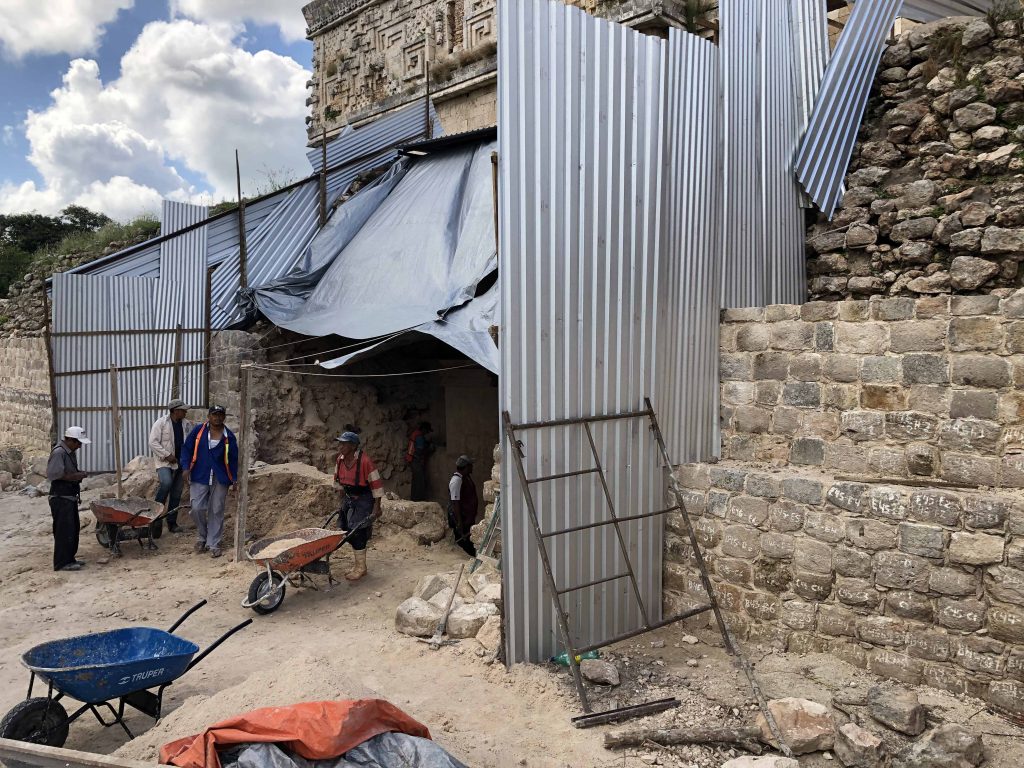 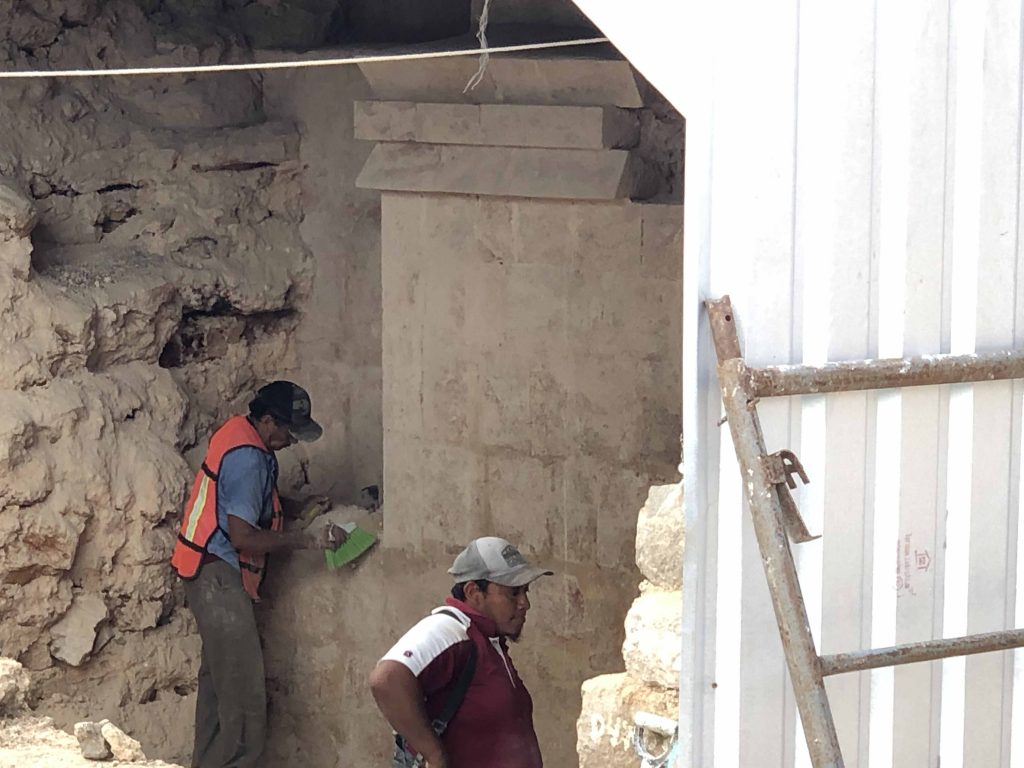 Does the official dating calls for further investigation?

It’s important to keep in mind that the authorities are not immune to human error. The official plaque for the House of the Turtles, sanctioned by INAH (National Institute of Anthropology and History) depicts a ground-plan indicating no doorway on the back (north) side and only one doorway on the right (east) which is evidently not the case.

The Cosmological Plan for the House of Turtles in Uxmal

As we have already explained, the name does not describe a specific purpose for the so called House of the Turtles, but rather derives from the sequence of sculptural motifs that decorate the buildings upper facade. Mainstream academics, archaeologists and historians have all failed at attempts to provide us with a satisfactory explanation for the actual function of the temple, merely suggesting that it may have been used for ceremonies to bring rain. While this is probably true, it does not account for the deliberate alignment to the Ball Court and the Nunnery Quadrangle. 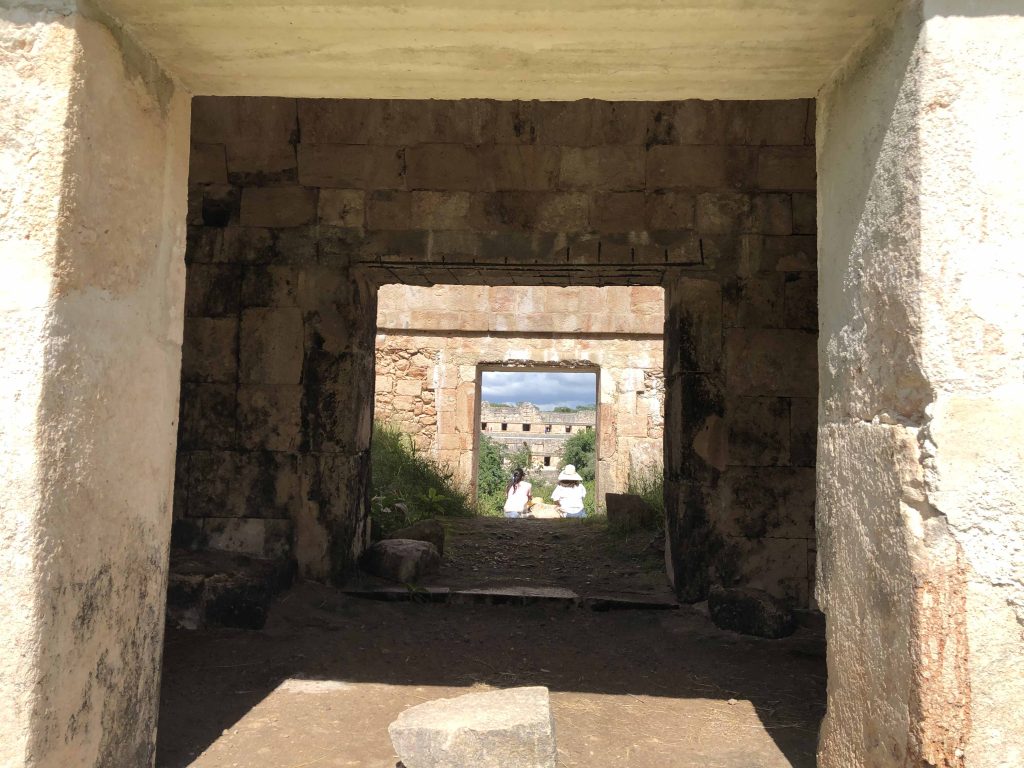 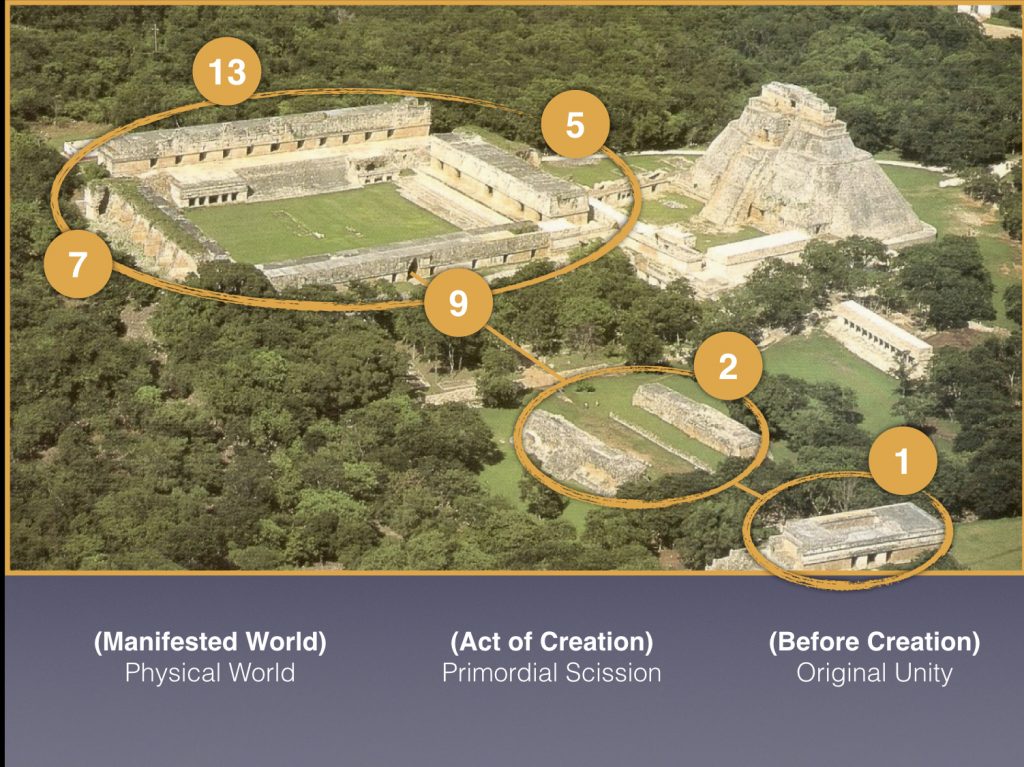 To line up with center of the North Building facade, one must look through the south and north doorways at a slight angle so in the interest of fairness, it could argued that the view does not line up exactly with center of the Nunnery’s North Building facade. However, this is easily rectified with the understanding that the lighter stone on the south face portal is tell tale sign of restoration which may include slight differentials from the ancient original due to human error in modern times.

While I can understand the orthodox point of view for the ceremonial activities that may have taken place at temple, the explanation only provides us with a piece of the whole puzzle. I believe the true purpose of the House of the Turtles is better understood by looking through an esoteric lens. Only then it becomes clear to see how the entire temple conforms to the greater cosmological plan laid out in Uxmal.

I have presented the plan in my theory at the 11th Conference on Precession and Ancient Knowledge (CPAK) which took place in Newport Beach, California where my presentation was well received not only by my colleagues, but also by members of the general audience.

From a symbolist point of view, the House of Turtles represents the origin of creation, the absolute or undifferentiated consciousness and it plays a significant role as an essential mystery school intended to inform initiates through didactic architecture.

Scholars have long known that access to the high elevations of pyramids and mounds were reserved only for elite members of Maya society such as the King who was typically a shamanic ruler with esoteric insights for transcending the material world.

The king, like those in Egypt, served as a prototype for what all man could become in a single lifetime and the elevation of the temple provided a crucial vantage point for orienting oneself with the cosmic plan in affect enabling the divine to flow through the adept initiate. This process underscored the sacred science of the ancient mystery schools, the world over.

The Symbolist Interpretation of the House of the Turtles in Uxmal 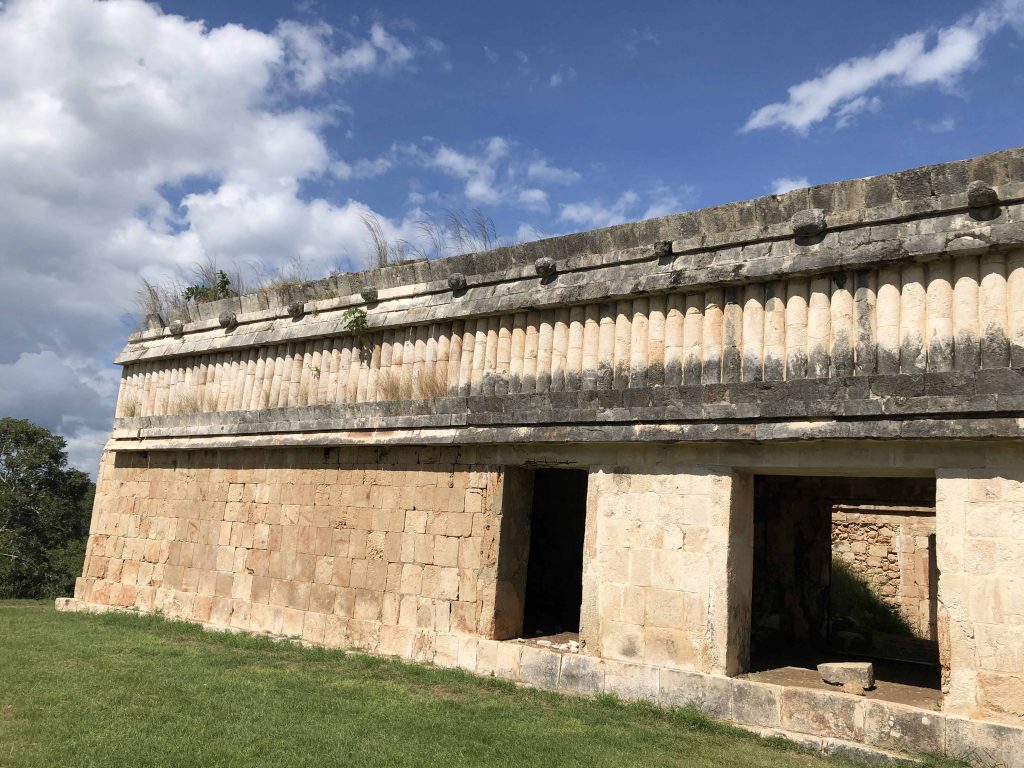 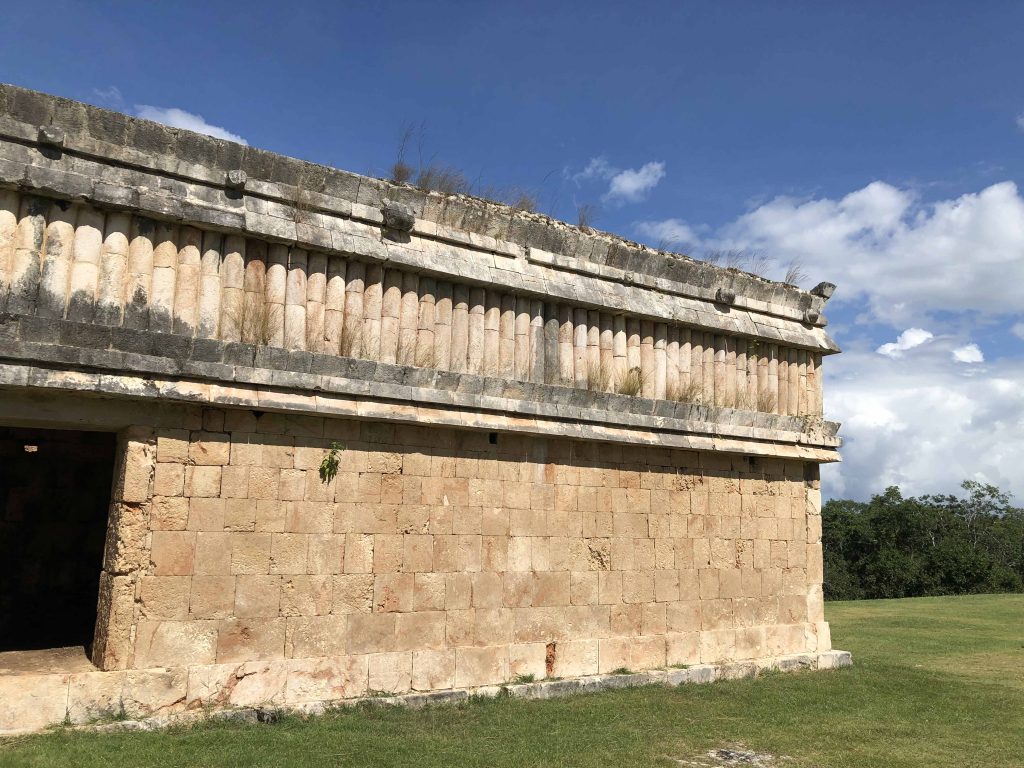 The House of Turtles is built on an artificial man-made mound, a mirrored expression of the primordial mound often symbolized by the turtle carapace in Maya mythology. In fact, in most Native American traditions, the World Tree grows out of the back of a turtle.

Looking through an esoteric lens, it becomes easy to see how the House of Turtles represents the source of creation; or the absolute and plays a significant role in the development of the initiates understanding for the greater cosmological plan for humanity.

From a cosmological point of view the symbolism reflects the primordial waters of chaos with the elevated status of the Temple on the vertical plane evoking order thereby requiring a great deal of veneration due to it’s association with water.

Symbolism of Turtle in World Traditions and Maya Mythology

The Maya associated turtles with rain water and fertility, and this structure, like so much else in Uxmal was consecrated to the aquatic principle. It was not only probably used not only for ceremonies to to bring rain but served as a mystery school to introduce initiates to the cosmological principles encoded in the structures at Uxmal. The turtle held special significance during sacrifices and it’s shell, also a symbol of protection and longevity was used to make a type of drum used during ritual. An image in the Codex Borgia depicts a turtle playing a drum. Turtles shells are also associated with ritual altars in some contexts. 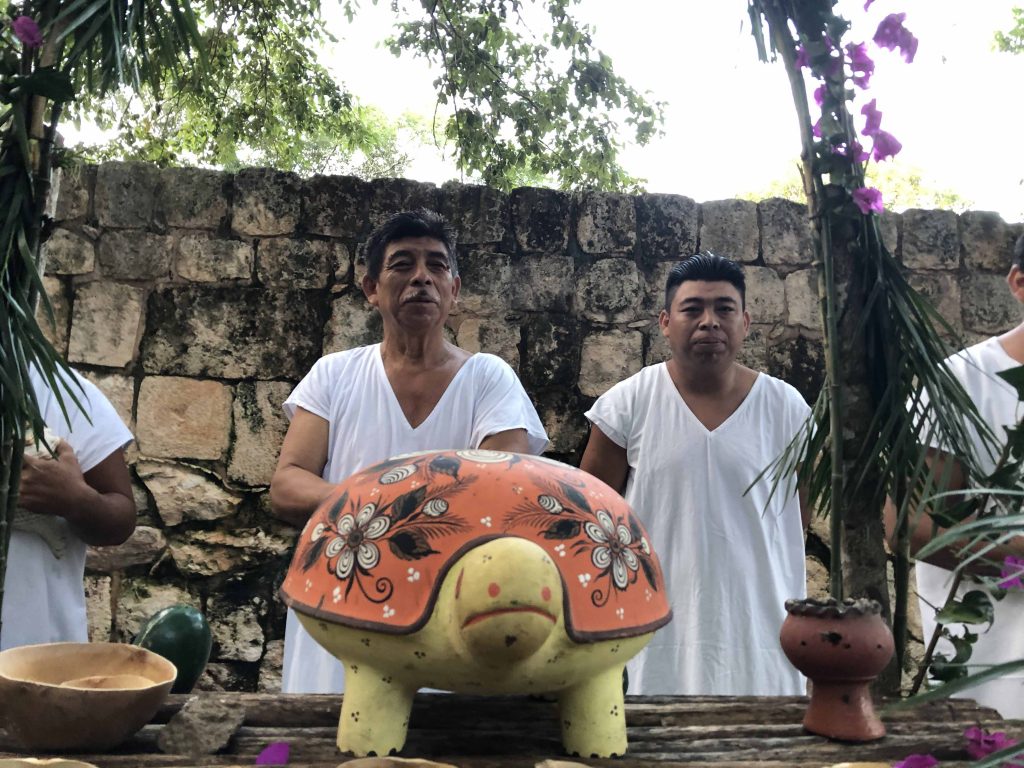 For modern man, the tortoise may appear to be innocent and rather unresponsive slow-moving household pet, but to ancient Maya it was a living collection of secret sacred symbols, and as such, it was accorded the same kind of reverence as Chac, the principle of water who produces thunder and rain by striking the cloud with his lightning axe. Some researchers have identified the turtle as a symbol of lightening.

This idea is also expressed in the Hindu Iconography where a cosmos-supporting tortoise is linked to Vishnu, who is said to have emerged from the waters of creation carrying the Earth on his back. Mongolian legends relate how a golden tortoise supports the mountain at the center of the Universe, which itself symbolizes the World Axis or omphalos corresponding to the Maya world tree. The Pauahtun, an Atlas-like deity who supported the world on his shoulders is sometimes depicted wearing a turtle shell on his head and the Maize God is sometimes shown emerging from a turtle shell.

According to a Maya tradition, this animal is also associated with astronomy and calendars because it takes thirteen moons for mother Earth to go around the sun just once just as thirteen scales make up the back of turtle’s shell. The creature was also linked to the summer solstice because of its slow movements and because the month K’ayab — represented by the face of a turtle — is when the solstice occurs.

The Turtle as a Symbol of Venus

Maya scribes would sometimes portray the turtle with the sign Kin (sun) in their eyes, implying a relation to the day, and like Chac and Kukulkan the turtle was related to the period of Venus.

Recent research has revealed how the Governor’s Palace, positioned on the platform next to the House of Turtles, was deliberating designed to align with Venus transits. Venus glyphs are found on the Palace facade so it’s not all that shocking to find a temple consecrated to the turtle by its side.

What were the Intentions and Motives of the Master Builders? 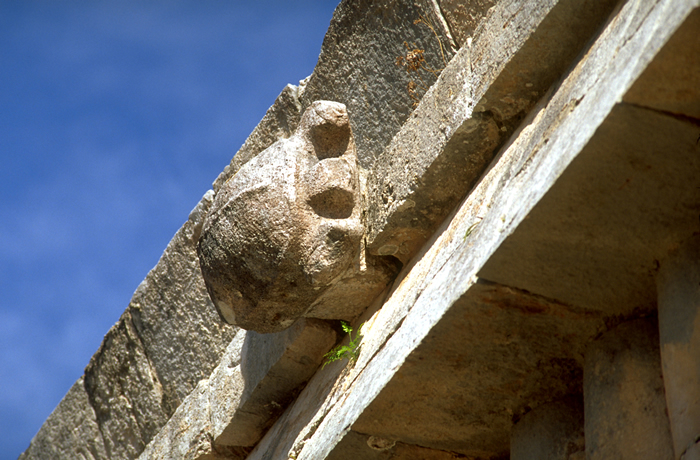 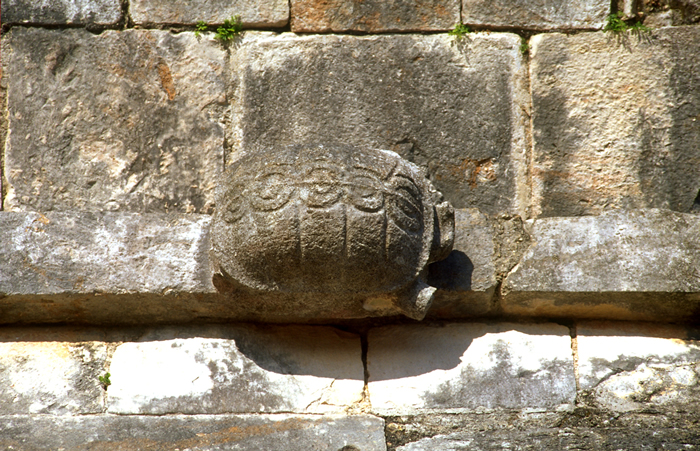 The carefully carved turtle is tenoned into the fillet, or center strip, of the cornice molding marking the meticulous master craftsmanship of the ancient architects. Also, each carapace has different markings.

This could only mean that each turtle conveys a distinct message. Perhaps taken as a whole, each symbol is meant to be understood as a single note composing a symphony in stone. What that message actually means remains to be deciphered, waiting for some bright mind to come along to crack the Maya code.

Until that code is cracked what we can say with certainly is that it’s evident theres more to be discovered about the House of Turtles in Uxmal.

Location of the House of the Turtles in Uxmal