House of the Iguana in Uxmal

The House of the Iguana in Uxmal, also known as the Iguana Building is usually not part of the program offered by local tour guides, which makes for a less exhausting but endurable day. 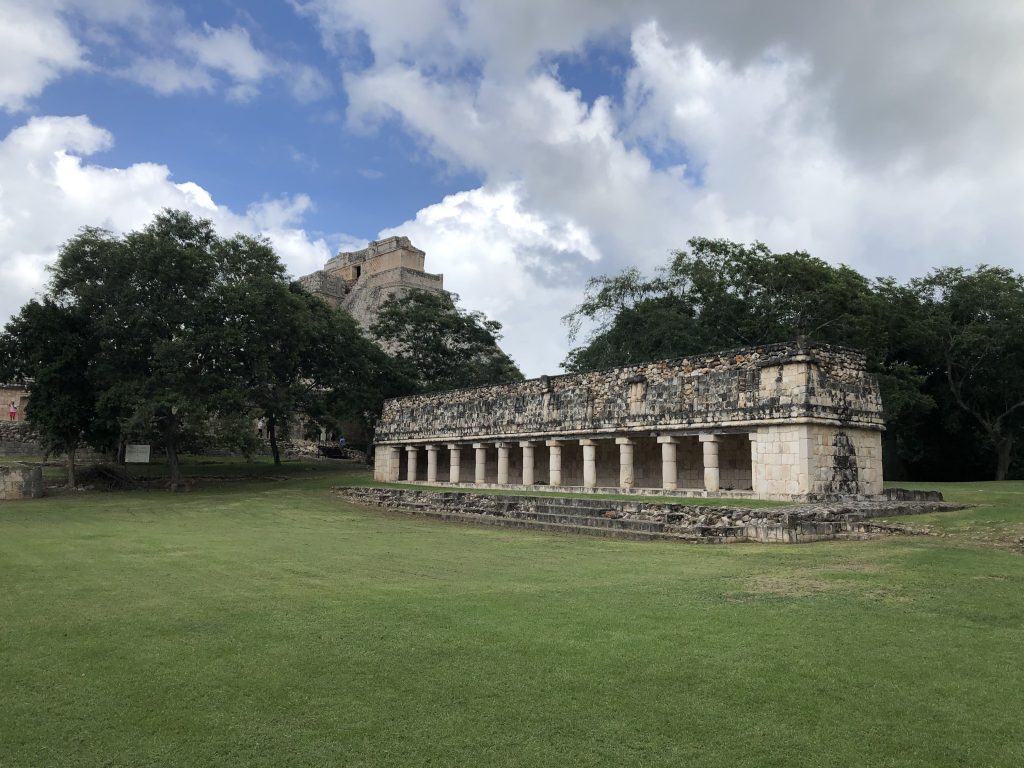 House of the Iguana or The Columns Building or The East East Portico?

The ancient name – if it had one – is unknown and the modern name is often misunderstood. Commonly referred to as the House of the Iguana, Temple of the Iguana or the Iguana Building at Uxmal, the imposing structure measuring 30m long by 4m wide is often left untitled on most maps and floor plans, although the official placard on-site sanctioned by INAH (National Institute of Anthropology and History) identifies this structure as The Columns Building or the East Portico. 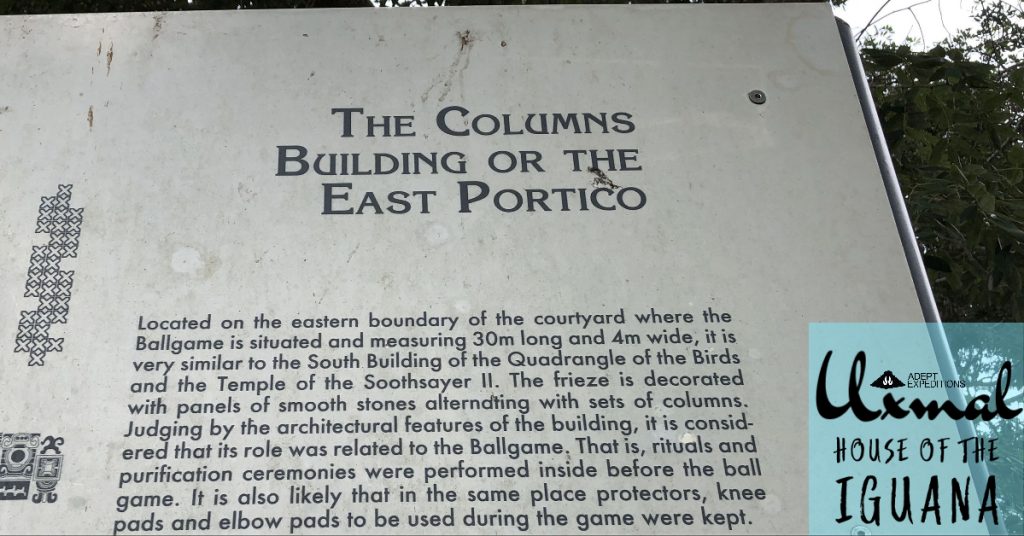 It is nearly impossible to visit Uxmal and not see a black spiny-tailed iguana (Ctenosaura similis) as they are the only remaining inhabitants of this ancient city and certainly serve as the inspiration for the structure’s nick name. I like House of the Iguana, let’s stick with that. 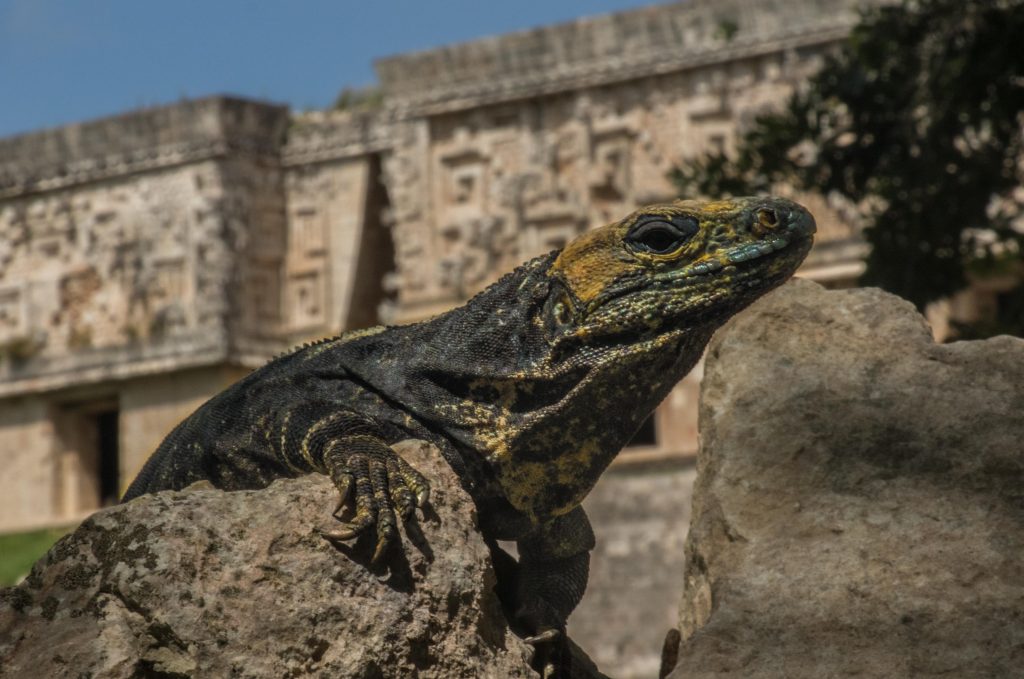 Physical Description of the House of the Iguana

The well-preserved and beautifully proportioned portico stands in splendid isolation on the eastern edge of the boundary of the Ball Court in Uxmal.

Four steps, running the length of the platform make up a walkway leading to a solitary colonnade supported by an enclosed wall to the east and a long sequence of 11 columns joined to the building by their capitals on the western face. The columns may be an example of the influence of Chichén Itzá on Uxmal architecture. While they are an uncommon architectural feature for the Puuc region, columns were widely used in ancient Greece and have influenced many cultures, including most Western cultures, although we also find columns in Egypt.

Unlike other structures in Uxmal, such as the Nunnery Quadrangle and Governor’s Palace, it does not have the customary lattice work or geometrical motifs but stylistically, the House of the Iguana is similar to the South Building of the Quadrangle of the Birds and the second temple of the Pyramid of the Magician in Uxmal. The frieze is decorated with a thin panel of smooth stones between alternating sets of columns imitating organic originals used in the ancient traditional homes of the Maya.

Each of the 11 columns are equally distributed between 12 spans creating an uncommon entry into the building. Notice the meticulous craftsmanship, the strange semi active or engaged columns at each opposing side that have been screened in, creating the enclosed space behind the entrance.

Judging by the architectural features of the building, archeologists have determined that its role was related to the Ballgame. They believe rituals and purification ceremonies were performed inside the elongated vault before the ball game. They also believe that vault served as storage space for protectors, knee pads and elbow pads to be used during the game, however the true function of The House of the Iguana in Uxmal remains a mystery.

The Maya did nothing haphazardly so why 11 Columns?

Symbolically, 10 represents wholeness or completion of a cycle, so 11 is the number of the transmutation of knowledge or transcendence. In western culture, “The Eleventh Hour” is given a sense of urgency because this is the last hour to act during a daily cycle before the clock strikes 12. Eleven is also considered the number of woman, since the female has 11 apertures in her body and some believe the unborn child receives 11 divine powers via these holes.

Eleven figures prominently in the esoteric tradition. Numerologists consider 11 a “master number” that shouldn’t be reduced into a single digit. Occultist and black magician, Aleister Crowley was particularly fond of the special significance that the 11th letter of the alphabet held, adding “K” to the word “magic” transforming it to special status. The eleventh card of the Tarot, representing either Justice or Strength rests at the mid-point of the numbered series of cards just as the Ball court serves as a mid-point in the cosmology of the Maya established between the Nunnery Quadrangle and the House of Turtles. It would not be unreasonable to conjecture that the House of Iguanas, located by the ball court, a symbol of creation, could have been a birthing house or even meditation chamber of sorts where the Maya were able to ritually transform themselves into a new creation before playing enacting the ball game.

Despite the ruins being beautiful and in an excellent state of repair, unfortunately this solitary structure is often passed over by the casual tourist. Nevertheless we always manage to pay our respects making a brief visit during our symbolist tours in the Yucatan.