The unusual and amazingly well-preserved stucco sculptures of the so-called winged warriors uncovered at the Mayan Ruins of Ek Balam are exciting for explorers investigating the mysteries of the Maya.

Unlike Chichen Itza, which is located about 65 km south of Ek Balam, the temple ruins are decorated with sculpted stucco rather than bas relief stone carvings. The artistic style depicting hair braids, lion cloth patterns, and the skulls carved into the belts of the unusual full-figured sculptures are unmatched anywhere else on the Yucatan Peninsula. These so-called winged warriors bear a strong resemblance to the Hindu personages that decorate pyramids in Classical India. It’s not unreasonable to ask if there could be a cross-cultural connection or influence. Are they somehow related? 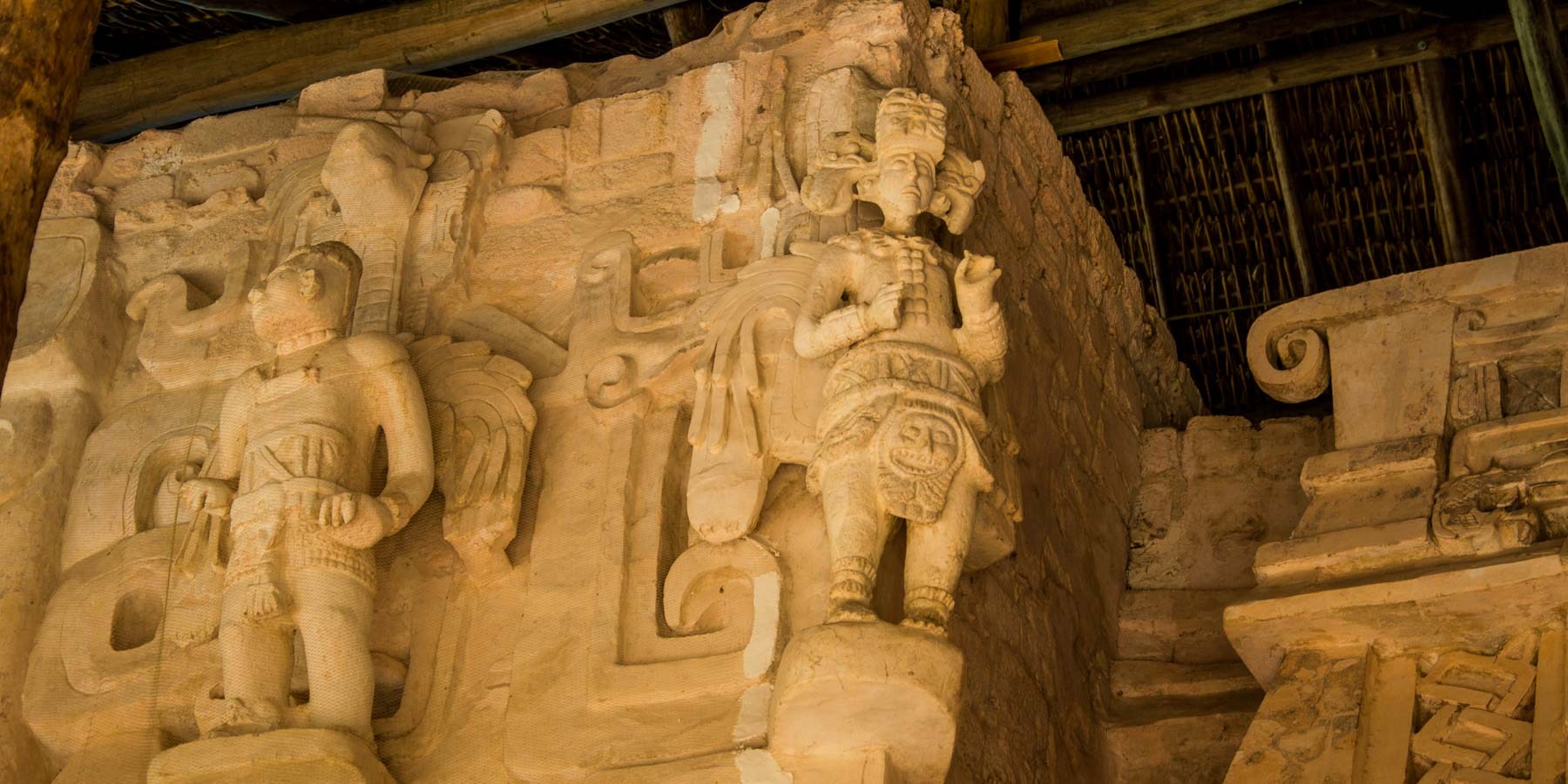 One of the figure’s hands appears to be making a symbolic or ritual gesture that can be likened to a mudra commonly used in Hinduism and Buddhism meditations to carry specific goals for channeling the body’s energy flow. Some even see Egyptian-looking glyphs when looking at the paintings found on the interior panel of the tombs alternative entrance, but how would that be possible if these people never had contact?

The early occupation and construction of Ek Balam predate the most iconic Chichen Itza, and many believe some of its sublime features may provide evidence to support the global seafaring theory proposed by diffusionist academics and some alternative researchers. 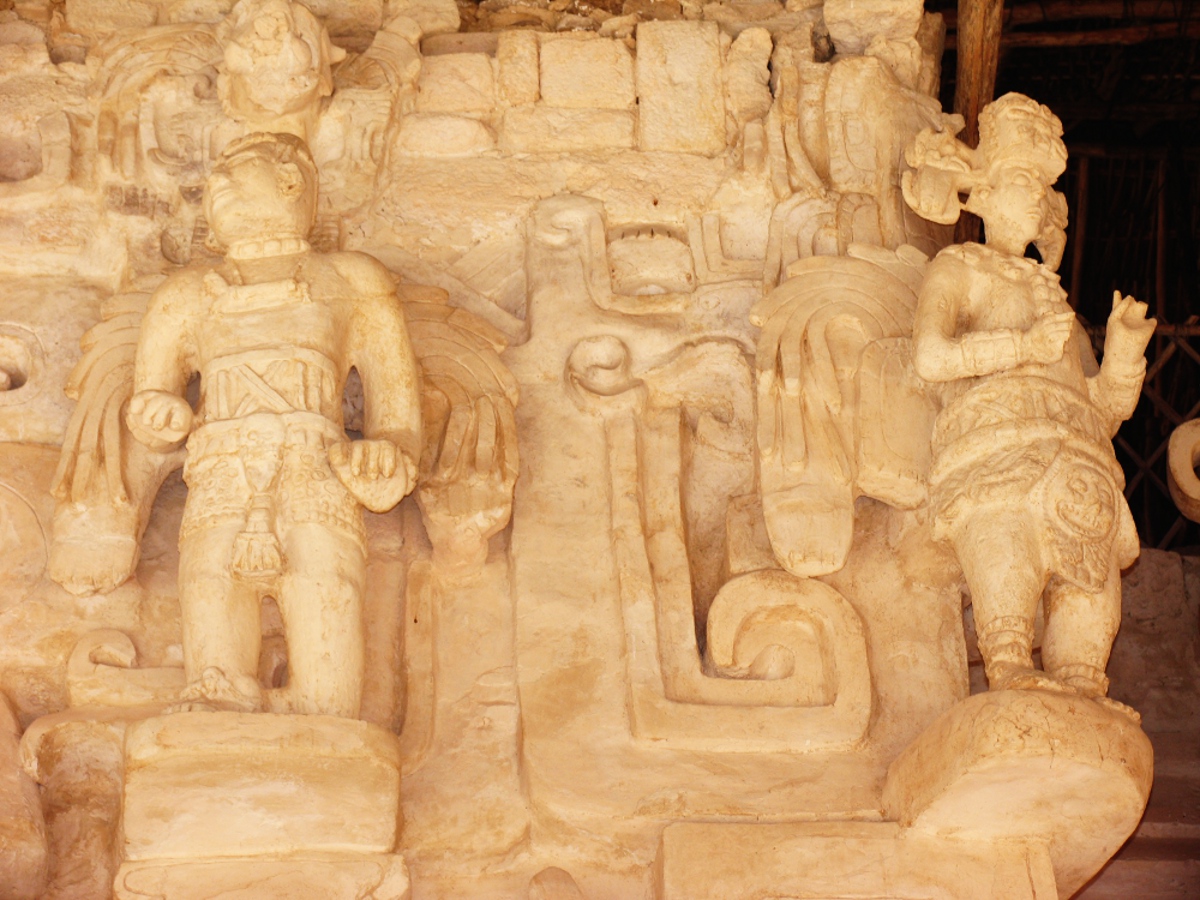 The intricate detail of artistry and didactic symbolism incorporated into the frieze is enough to leave spectators in awe with each visit.  We spend a lot of time detailing the entrance to the royal burial tomb of Ukit Kan Le’k Tok’, ruler of Ek Balam at the cities height of power, at the acropolis during our symbolist tours of the Yucatan.

The Acropolis is the most striking temple and main attraction at Ek’Balam – with its length of 160 m, the width of 70 m and a height of 31 m this pyramid is definitely the biggest pyramid in the northern Yucatan peninsula, due to its volume and it remains one of the largest structures ever excavated in the Yucatan. 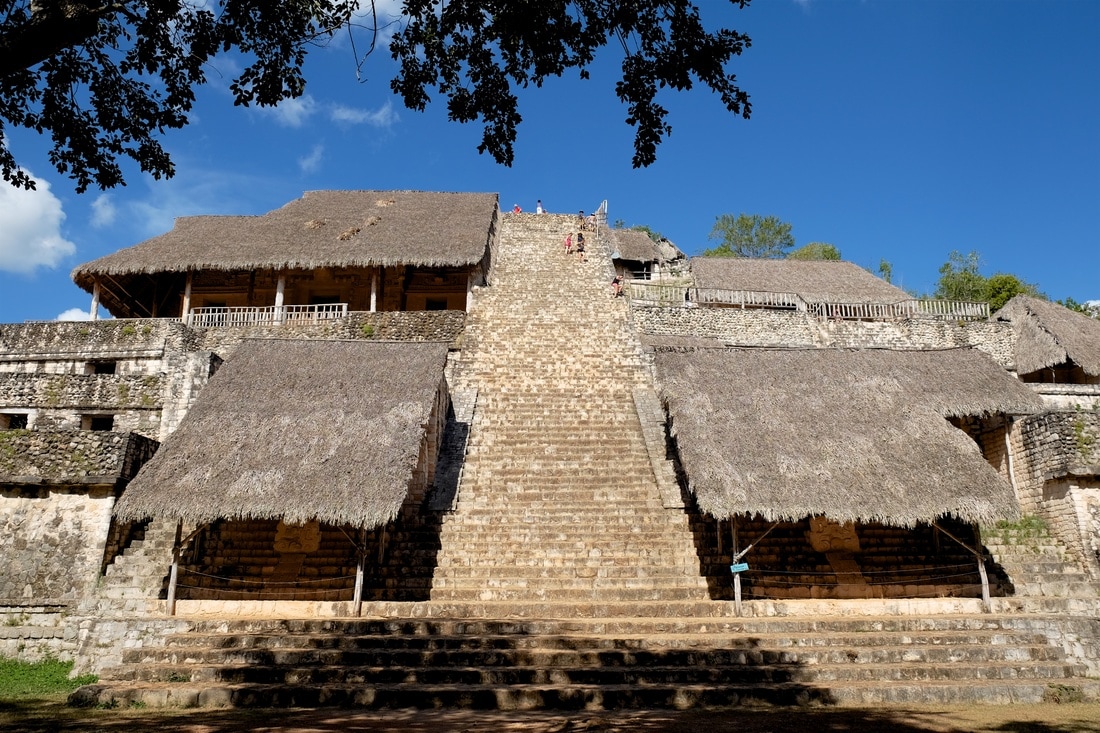 To maintain this preservation, much of the structure is covered in thatch to keep out sun and rain, and so the Winged Warriors are only visible once you climb up the structure. On a platform just before the top, you will find the tomb of the powerful ruler, Ukit Kan Le’k Tok’ – where these spectacular winged figures can be found.

It’s not clear if the entrance of the tomb is shaped into the mouth of a jaguar or as some academics have suggested, a Witz monster – or even a composite of both. What is certain is that for Maya this Chenes style monster mask entrance represents a portal to the ¨other world” or the “Flowery mountain”. It is awe-inspiring when you come face to face with the Witz Monster and peer into the underworld leading to the burial chamber.

The decorated facade found on The Tower, “El Torre”, is not the only unique feature we find at Ek Balam most striking temples but its use of multiple layers in the architecture is another characteristic that sets this structure apart.

When first approaching, the first thing attracting your attention to the Acropolis will probably the serpent sculptures on the steps of the lowest level. The serpent’s tongue extends out of its mouth and is covered with glyphs. There are two of these hieroglyphic serpent stelae, both with inscriptions. I looked into the glyphs on the tongue and have been successful in developing a deeper understanding through reading academic papers.

It appears to be a warning message to interlopers or foreigners. Could these implications support diffusionism?

On the level below we see glyphs that read “Uke Kaba” meaning “his name”.

Then we find the symbol for the “King of Kings”  and the next row mentions Ek Balam’s ruler by name, “Ukit Kan Lek Tok”. Take note that “Kan” is also the word for serpent in the Mayan language. Something I find interesting as we decode glyphs found on the tongue of a serpent. However, his name means the father of the four flints.

To the left of the bottom row, we can see the emblem glyph for Ek Balam, meaning dark jaguar or star jaguar or even dark star jaguar.

It’s also interesting to note that Ek means “dark” but can also represent dirt or the dark soil. This could be a stretch of my imagination at work but it calls to mind how Km.t was the name of the land given to Egypt by its ancient people. Al Khem. This where we get the word ‘alchemy’ from. Km.t or Kemet meant the “black land” for the rich alluvial soil found along the Nile.

If we reverse the K and the E we now have EK, which means dark dirt or soil and even star to the ancient Maya.

The master Maya teacher, Miguel Angel Vergara, studied for 17 years with Mayan elder, Don Vincente Martin, who was a wisdom keeper, professional teacher, and artist. He is well versed in the indigenous tradition and had worked at Chichen Itza for a number of years. He shared with me what he believes is the image of an Egyptian Pharaoh depicted in a restricted area at Chichen Itza. Could the ancient Egyptians have visited the ancient Maya?

Or did the Maya make a cameo in ancient Egypt?

Khemitologist Stephen Mehler has an MA in Egyptology. He may have spent decades investigating the vast temples and structures of Egypt, and allegedly identified a connection between two of the most well recognized ancient cultures on the planet. In 1997, during a research trip to Egypt, Stephen Mehler was shown an unusual symbol on the ceiling of a temple known as the Temple of Maya.

There appeared to be several circular symbols that bear no resemblance to Egyptian hieroglyphs. It is interesting to note that the word Maya in the ancient language means water and may have referred to a certain class of person in the Egyptian caste system very similar to a record keeper or scribe.

This relief, when shown to a Maya day keeper was confirmed to resemble some form of calendar system once held by the Maya. In the interest of fairness, I have never come across anything in the land of the Maya that resembles what Stephen Mehler was shown on the ceiling in the Egyptian tomb.

The glyphs on the tongue of the serpent stele refer to Ukit Kan Le’K Tok’ as the holy lord of Talal. From this, the epigraphers and archaeologists have determined that the site of Ek Balam may have once been part of the kingdom of Talal. We also see the “o ya ak” which means “it says” as to say “it says – all of the info above”.

This is common to find at the end of a Mayan script.

In short, the serpent tongue is sending a message to remind and warn outsiders and interlopers who arrive here that they are in the presence or home of Ek Balam’s powerful ruler. Certainly, the locals were aware of his power. So then why the need for the propaganda? – unless of course, the inhabitants of Ek Balam were expecting visitors.

Ek Balam is one of the most interesting ancient Mayan cities to explore, partly because it’s largely unknown to most tourists. If you are looking for an off the beaten path experience without the crowds this is it.

In addition to the carved winged figures and unusual facade on its most prominent temple, Ek Balam will mesmerize you with its amazing symmetrical structures, oval palace, unique four-sided entrance archway, sacbes, and a ball court.

Ek Balam has been known since the Spanish conquest of Yucatan in the 16th century but it was rediscovered in the 1800s. However, it wasn’t until the late 90s that archeologists accidentally stumbled upon the top of the acropolis and unearthed the winged warriors. 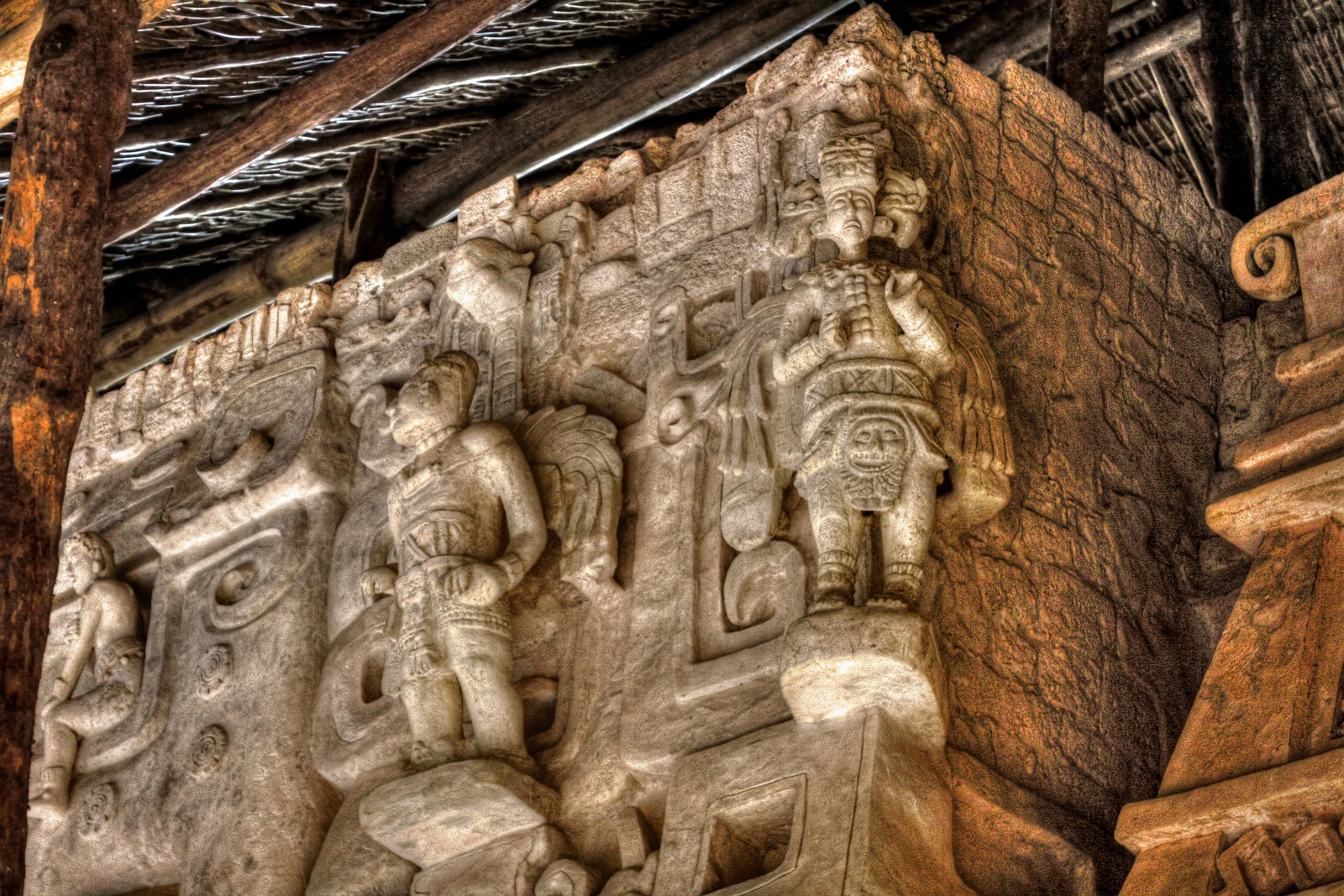 What I find most interesting is that the ceremonial center of Ek Balam is surrounded by two enormous structures that have not been excavated yet. The fact that the stucco reliefs found at the Acropolis were in such great condition make this one of the most spectacular Mayan ruins on the Yucatan peninsula, but it is the possibility of finding more well-preserved and perhaps unusual reliefs on those massive structures that draws my interest. What lies beneath? 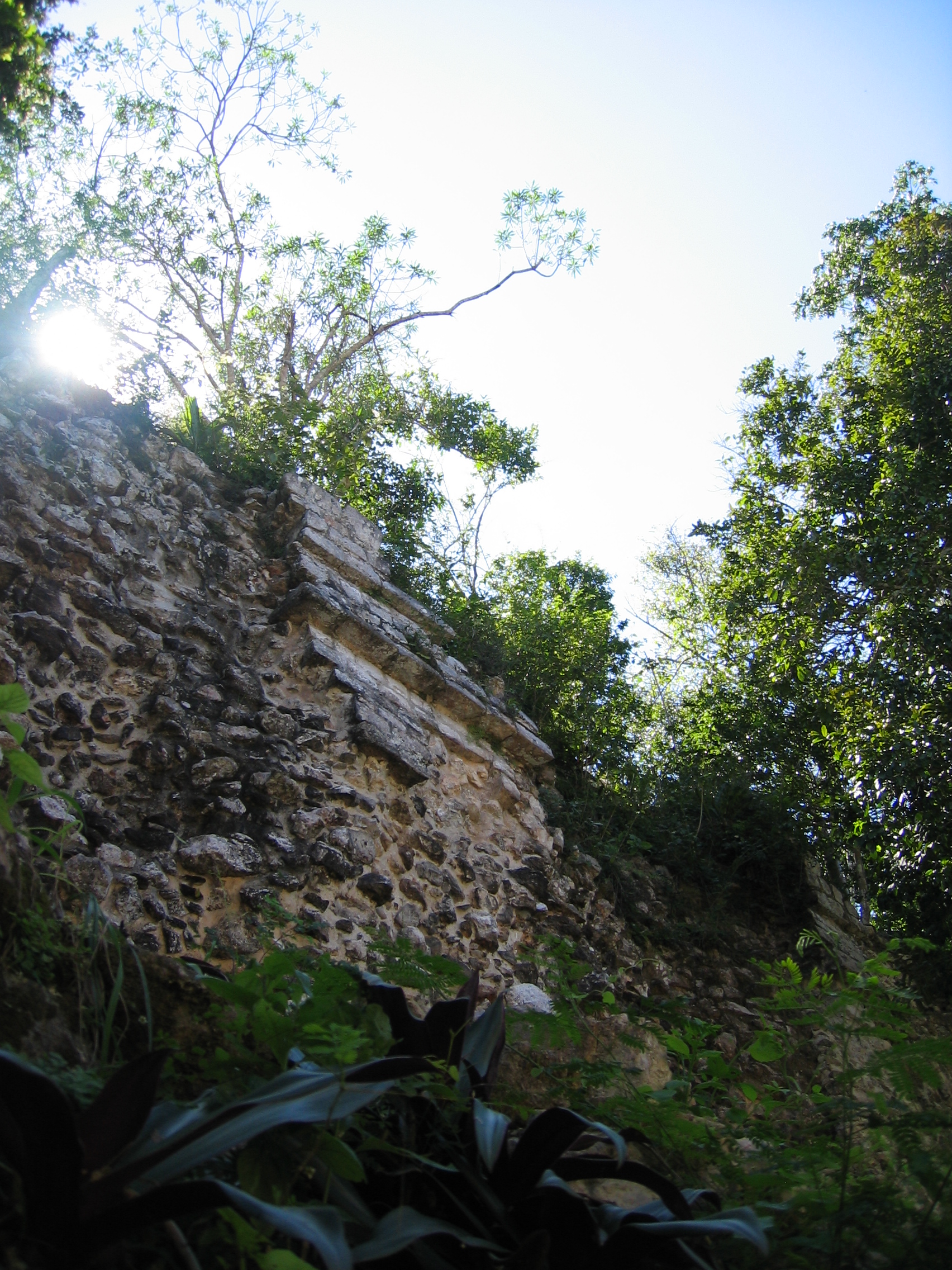 Will future excavations performed on these buried structures reveal more unusual winged warriors or other well-preserved artifacts? What more can we learn about the spiritual life of the ancient Mayas who came before Chichen Itza? What clues to our ancient past are waiting to be discovered?