Storytelling is common to every culture. Most people enjoy listening to stories. In fact, storytellers have catered for the need for a ‘good story’ since the beginning of civilization.

In this video below I’ll tell you the story about the dwarf of Uxmal & examine the indigenous legend behind the builders of the Magicians pyramid at Uxmal. This is one of my favorite stories to tell and Uxmal is one of our favorite Mayan sites. In fact, we love Uxmal so much we decided to get married and have our Mayan wedding ceremony there!

Back to the legend…

Across the globe we find the remnants of ancient civilizations including pyramidal structures that pose questions. Who were the builders?

Why did they build them?

And What purpose do they serve?

If a conjecture is realized it is very difficult to see how it remains a conjecture. However without a record of how these structures were built we can only speculate and form theories on who we think built these ancient pyramids.

What can we glean from the Mysteries of the Maya?

There is an indigenous oral tradition perpetuated by the Maya on the Yucatan Peninsula about the builder(s) of one of the world’s most unique pyramids – The Magician’s Pyramid at Uxmal.

Known for its aesthetics – unique architecture and stunning symbolism to the un-initiated eye it is by far the most dramatic of all the hill and flatland archeological sites in the Yucatan, but when viewed through the eyes of a symbolist it becomes clear that this sacred site is consecrated to water and represents the divine feminine principle.

Mystery of the Maya

but unlike many of the other sacred sites of the Maya, no stone quarry has ever been found at Uxmal….

Where the Maya quarried the stone from is a mystery, and how they conveyed it to this site is unknown to archaeologists…

But the indigenous oral tradition maintains that Uxmal’s most famous structure was built over one night, with the use of magic, by a dwarf (who was hatched out of an iguana egg) with magical assistance from his sorceress mother as part of a challenge issued by the King.

These are all titles given to this so-called pyramid by the local Maya, consecrated to this indigenous oral tradition.

The first detailed account of the rediscovery of these ruins were published by Jean-Frederic Waldeck in 1838 who went on to label it the Kings borough pyramid – in honor of his financial investor. 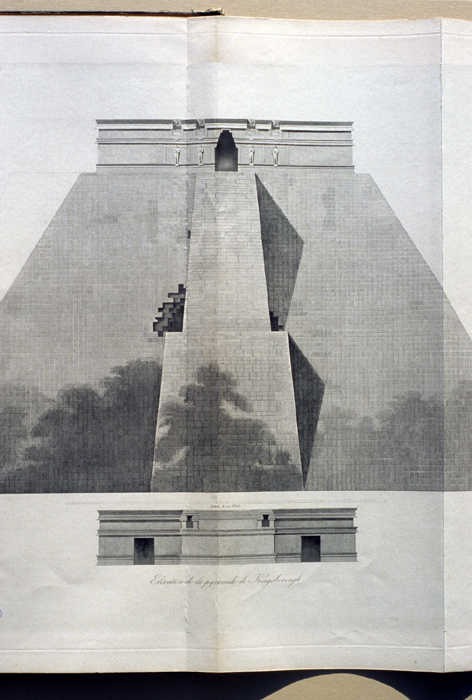 However, Waldeck’s account of Uxmal inspired explorers John L. Stephens and his illustrator friend, Frederick Catherwood, to make two extended visits to the site in 1839-1841, to record and sketch the layout of the complex.

From his notes, explorer John L. Stephens published his now famous Incidents of Travel in the Yucatan in 1843

Stephens writes about his arrival at Uxmal and tells us how he was seated in the doorway of the Magicians Pyramid when he received from the lips of a local, the legend behind the sites tallest structure and its builders…

If so watch this video below…

THE DWARF OF UXMAL & THE MAGICIANS PYRAMID

Could this Linguistic Usage Hint at a Lost World?

In Yucatec Maya, the words for dwarf connect the Maya creation myth and the Precolumbian images of dwarfs to modern narratives and rituals that focus on a non-human dwarf called the alux. The following list contains some of the vocabulary associated with dwarfs today:

Creation narratives told in Yucatan also tell of a world, before the present, when the gods fashioned a race of dwarfs from mud so that these creatures would worship them. The dwarfs possessed eyes that could see to the ends of space and time. Before the gods could even fashion wives for them, the dwarfs began to ignore their creators. Rather than worshipping the gods they spent their time creating beautiful pottery, writing books of prophecy, and constructing magnificent buildings of stone.

The dwarfs angered the gods so much that they sent a flood to destroy the world. They also destroyed the false sun that gave the dwarfs’ world a dim light.

Being possessed of keen intellect and foresight, some of the dwarfs managed to escape the water by stepping onto ledges in caves in the Puuc Hills where the hunchbacks live.

Dwarf-like beings with special powers and excellent craftsmanship are not limited to the Maya culture.

Take for example the Hawaiian legend of the Menehune, a dwarf like race that are also believed to possessed special powers. In fact, in 1829 a census from the island of Kauai listed 65 people as Menenue.

But the question is, did the Menehune actually exist?

Some historians argue the Menehane is derived from ‘Manahunae’, a title that was given to the islands early inhabitants by the Tahitians meaning “commoner” in the Tahitian language referring a race of people small in social rather than physical stature.

Yet, the Hawaiian legend has it, that the dwarf race of Menehune worked to build their temples overnight – in a single night, and the state of Hawaii honors and acknowledges this tradition as indicated by the posted signs at several of the sacred sites.

During an on on-site investigation in Hawaii, a local brought me to a mysteries hole in the ground that leads to tunnel that requires one to first crawl through on their stomach before it opens up into a small man-made chamber. The construction of that chamber suggests a less than average-sized human may have built it. I’ll detail this undisclosed location in a future video. You can subscribe to my youtube channel for the update here.

The self-taught engineer and amateur sculptor Edward Leedskalnin who single-handedly built the limestone structure known as Coral Castle in Homestead, Florida using what he claimed was the secret of the Egyptian pyramid builders.

We know that he also worked during the night to complete his unusual accomplishment.

Why is it that nightfall is a common recurring theme that supports the constructions of these legendary builders?