In almost all the cultures of the world the winter solstice has been marked as a day of renewal or change. This natural phenomenon appears to indicate that throughout the year the sun does not always rise or fall from the same place: it gives the impression that it runs through the entire celestial vault reaching its highest point around December (and March 21, respectively). It is in these days that it seems to stop completely and that it no longer travels the sky. In fact, the word solstice means “Sun stopped”.

The Mexika or Aztecs (as most know them) realized that for a few days the sun did not move, so they took this opportunity to celebrate the “birth” of the next cycle. This was the observance of the birth of Huitzilopochtli the sun.

The Panquetzaliztli was the great feast of the Mexikas. This feast took place during the twentieth day of their fifteenth calendar month. In this tradition, Huitzilopochtli defeated his older sister, the Moon or Coyolxauqui, and her four hundred brothers (the southern stars) called Centzonhuitznahua. Some scholars believe that the feast also represented the birth of Mexika civilization.

Each year, on the first day of the Panquetzaliztli, a ritual celebration was performed in honor of the sun, Huitzilopochtli. This was a winter solstice festivity to solemnize the sun’s rebirth on December 21. Preparation for these rituals was initiated through fasting. A race began in the Huey Teocalli (great house of the sun). The ceremony launched with a race led by a swift runner who carried a figure in his arms of amaranth styled as Huitzilopochtli and on his head he wore a blue (texuhtli) flag.

During the winter solstice, the sun had already traveled through the celestial vault and had died on December 20. 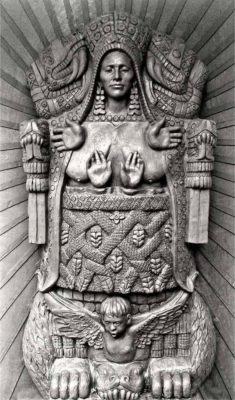 The astronomical event of the solstice marked the time when Mother Earth or Tonantzin Coatlicue was far way from Tonatiuh the sun. Since the sun looked tiny in comparison to earth because of its distance, it was called The Boy Sun or “El Nino Sol”. Allegorically Piltzintecuhtli the rising sun, represented the small sun within every human being. The physical sun gave life to the earth and the sun in our microcosm provided light for our inner blossoming. This sun is about conquering our weaknesses, it is our will power.

The sun looked like a tiny hummingbird in the distance. Huitzilopochtli, was also called “Colibrí zurdo o colibrí del sur” or the left handed hummingbird (it is the only bird who flies backwards) /hummingbird of the south. Consequently during winter hummingbirds migrate south. This is the reason why the sun is symbolically compared to the hummingbird flying to the left.

In Malinalco on Dec 24th, they celebrated the rising of the sun with a series of rituals and dances. During this time the peoples installed banners or pantli of yellow paper (these pantlis were also used on tzompantlis) on all the fruit trees and edible plants of the season. On the day of the festival all the trees were cured and they were offered pulque (meoctli) and tortillas (tlaxcalli), as a sign of gratitude for what was harvested during the year.

“Fernando López Aguilar, a researcher at INAH, says that even on the hill of Coatepec some inhabitants celebrate Huitzilopochtli on December 21, the date of his birth.”

The Maya and Winter Solstice

The Haab is a Maya’b calendar composed of 365 days, 5 hours, 48 minutes, and 46 seconds. A people that had one of, if not the most astonishingly accurate calendars in the world obviously had the ability to understand what was happening on the winter solstice. They associated this sacred event with the sun’s victory over the world of shadows. So it is no surprise that the current Mayas of Chichicastenango celebrate December 23 as the day of “sunrise.”

The ancient traditions of Mexico have been mostly if not all absorbed by the Catholic religion (in their respective areas). One example out of many is the festivity of the  Virgin Mary or what the ancestors termed as mother earth “Tonantzin Tlalli Coatlicue”. Then of course we have the traditions of Egypt in the form of Isis taking on the identity of Virgin Mary and Osiris assuming the role of Jesus (with far too many other traditions to mention). What is seen as heathenism to organized religious sects who have usurped countless traditions all over the world, is based on astrological principles (astrotheology) and profound esoteric wisdom.

This time of darkness during the winter solstice marked an observance of the cycle of darkness being vanquished by the sun. It is in these days that we have to meditate on the darkness that is mother and the birth of light through it’s womb. It is time to let what does not serve you perish with the darkness and start planting new seeds that will be nourished with the rebirth of the sun. Let the cosmic flower (la flor cosmica) blossom within you!