Do you consider yourself  a healer? With or without the title of “healer” most self sacrificing people undoubtedly take the pain of others unto themselves as an act of service. We do this because most of us are empathic and can relate to the pain of others.

There is also the narrative of the Shaman or teacher who does this as their life’s calling. Often these energy exchanges are not even. We all want to be magnanimous but are we helping or harming ourselves and those involved in the process?

Take the principle of Karma, aren’t you interrupting the persons karma that you are helping? Perhaps this is their cyclical debt to the cosmic. As you can see healing is riddled with more than just the positive aspect of regeneration. It is without question, imbued in darkness. 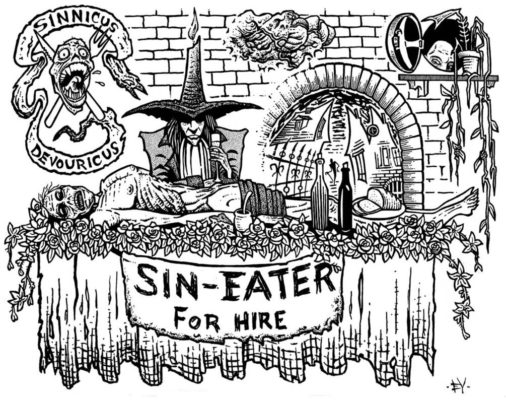 What in the world is sin-eating?  Sin-Eating was practiced in Britain around the 19th century. A sin-eater is a person who eats a meal ladened with the energy of the committed sins of a dying person.  The sin-eater would eat a meal to absolve the soul of the soon to be deceased. The food absorbs the sins and the consumption of this ritual meal by a sin-eater is a shifting from sinner to vessel. The families of the stricken person would either pay in money or “free food”.

I am not sure if under these circumstances the free food is an offer that most would jump at but sin-eaters were through circumstance, poor. The sin-eaters essence became engulfed by not only their sins but all the sins they consumed for their patrons.  Like most shamans around the world the sin-eaters were shunned by their communities and lived in a desolate state.

( a woman or female mammal) about to give birth; in labour.

In Mexica tradition, Tlazolteotl is the Aztec representation of regeneration, redemption, midwifery, and healing. She was also seen as a redeemer because of her regenerative role. As Tlazolteotl-Tlaqueani she becomes the eater of sins. People who had sinned gravely seeked guidance from Tlazolteotl to eat the sins(filth) and undo the harm they had done. Her priestess-hood would hear confessions in order to exculpate miscreants and seek out adulterers to bring to punishment.

Sullivan, perceived her as the “Goddess of Filth”, “Eater of Ordure” because of her adorned orcher face paint used to depict excrement. The Spaniards took the portrayals literally and named her “Filth Eater”. The complexity of how this concept was seen among the Mexica is that instead of “waste’ or filth it was a composting or recycling principle. All sh*t has meaning. Klein denotes that this principle is not merely “waste” but rather “divine excrement”.

Teotl woven with ollin creates the sacred movement, or as Oropeza defines it stone movement.

Editors note: The meaning of Teotl is still hotly debated by indigenous movements in both the U.S and Mexico. What some term as the alternative interpretation would be that Teotl can be translated into energy or energy principle (much like the Egyptian Neteru). The majority of mainstream academia uphold the Spaniard interpretation of Teotl as God.

Even though today in metaphysical communities we see shamans as venerated wisdom keepers, this isn’t and was not always the case. A shaman in Mexica or Maya’ab communities was usually chosen by the sign of their Nawal or spirit companion. In other circles the call to be a shaman came through dreams, trance, or recovery of illness. The ancestors will call the future healer during an exceptionally onerous time in their path(s). This call will present itself during periods of stress, illness, accident, possession, or near death experiences. It is for this reason that Shamans have been deemed as  “wounded healer(s)”.

When a shaman heals they can be under the attack of malignant entities who can eat the shamans spirit in another realm. The shaman is a conduit of energy, not the source. Often he or she is just a mirror reflecting the healing you have to realize and not the other way around. Shamans sacrifice their health, both spiritually and physically, and give their lives to their mission. Still, they have a great chance of being marginalized by their communities and society.

The shaman is not merely a sick man, or a madman, he is a sick man who has healed himself.

Most shamans get paid by their communities by either having their sustenance or shelter provided for. Some shamans are only part-time healers because the community cannot afford payment so they also hold secular jobs. Much like modern day priests they live on the giving of the people.

Wisdom Does Not Come Without Pain

The path of a lot of teachers is grueling and most often the real shaman has endured insurmountable suffering to acquire their wisdom. Remember that when you seek the help of a teacher. Respect their journey and the knowledge they exchange with you. Give something in return as an equivalent of the energy that was exchanged. You cannot leave the scales unbalanced. Shamans require payment, wether it be money, food and shelter, or your spiritual growth. They provide the cleansing of trauma and emotional work is taxing; yes it is work! It often depletes them of emotional energy and can riddle the body with sickness. This is the conundrum of the Shaman becoming a Sin-Eater.

Healing is beautiful and sacred. Honor those who provide you with this gift.